Pope arrives in Lebanon with message of peace 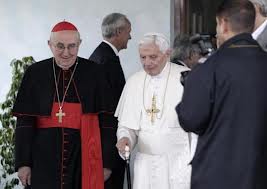 A plane carrying Pope Benedict arrived at Beirut’s Rafik Hariri airport on Friday, witnesses said, at the start of a three-day visit aimed at addressing the position of Christians in a region torn by civil war in neighboring Syria.

The Lebanese army has deployed thousands of troops to secure the pope’s visit in which he is expected to stress unity among the different Christian churches in the Middle East and peace between Christians and Muslims.