Pope appealed for a stop to arms exports to Syria 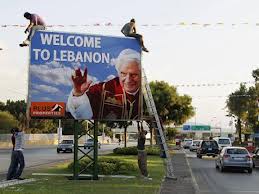 Pope Benedict appealed for a stop to arms imports to Syria on Friday, saying it would help end the civil war there, and said the Arab Spring was a positive “cry for freedom” as long as it included religious tolerance.

Benedict spoke in his plane flying to Beirut, only 50 km (30 miles) from the border with Syria, for a three-day visit focused on promoting peace in the Middle East and harmony between its minority Christians and majority Muslims.

Christian, Sunni and Shi’ite Muslim and Druze religious leaders joined Lebanon’s political elite in greeting Benedict on his arrival, displaying a harmony not seen elsewhere in a region now rocked by protests against a U.S.-made anti-Islam film.

“The import of weapons has to finally stop,” Benedict, 85, told journalists on the plane. “Without the import of arms the war cannot continue. Instead of importing weapons, which is a grave sin, we have to import ideas of peace and creativity.”

The Arab Spring uprisings against authoritarian regimes were “a positive thing. There is a desire for more democracy, more freedoms, more cooperation and renewal,” he said.

But he added that it had to include tolerance for other religions. Asked about Christians’ fears about rising aggression from Islamist radicals, Benedict said: “Fundamentalism is always a falsification of religion.”

All main faith groups in the country, which fought a civil war along sectarian lines from 1975 to 1990, have welcomed the visit. Among banners greeting Benedict on the road from the airport were several from the militant Shi’ite group Hezbollah.

LEBANON AS A MODEL

In Christian districts of the capital, pictures of the German-born pope were plastered in every street and church bells rang out on Friday morning.

“The pope is with us,” was the headline in Al-Nahar newspaper, which said more than 5,000 military and security personnel were being deployed to protect the pontiff.

Clashes from the Syrian war – an opposition group says more than 27,000 people have been killed in the uprising against President Bashar al-Assad – have occasionally spilled over into Lebanon, evoking fears of renewed strife here.

Tensions have been rising between Lebanon’s Sunni Muslims, who generally back the uprising led by Syria’s Sunni majority, and Shi’ites who usually support Assad’s minority Alawite sect, an offshoot of Shi’ite Islam.

Benedict said Lebanon “surely demonstrates to the whole Middle East and to the rest of the world” that Christians can live peacefully with other churches and other religions.

“This equilibrium, which is presented everywhere as an example, is extremely delicate,” he said in his arrival remarks in French. “Sometimes it seems about to snap like a bow which is overstretched.”

A Reuters journalist at the scene saw smoke billowing from the restaurant, which was attacked in protest against a film released in the United States denigrating the Muslim prophet Mohammad. Witnesses said that residents put out the fire.

Locals watching the attack said some people were shouting, “We don’t want the pope” and “No more insults (to Islam)”.

In a Palestinian refugee camp south of Beirut, Christian Melvina Haddad said: “The pope is here to make peace and love and bridge the gaps between the Muslims and the Christians.”

A Muslim refugee, who asked not to be named, said: “If he brings peace to us here, the Palestinians, then he is welcome.”

Benedict angered Muslims early in his papacy by suggesting in a 2006 lecture that Islam was violent and irrational. He said this was a misunderstanding and visits to Turkey later that year and Jordan in 2009 largely calmed the controversy.

The pope will also urge Christians not to leave the Middle East, the birthplace of the faith that they have been steadily abandoning in recent decades to escape wars, political unrest and discrimination by the region’s majority Muslims.

On Friday, Benedict will issue a document along these lines known as an “apostolic exhortation”, based on discussions among Catholic bishops at a Rome synod on the Middle East in 2010.

He will also hold two major open-air events and meet leaders of all Lebanon’s many Christian and Islamic communities, as well as the country’s political leaders.

Christians now make up about five percent of the Middle Eastern population, down from 20 percent a century ago. If current pressures and their low birth rates continue, some estimates say their 12 million total could be halved by 2020.

About two-thirds of Lebanon’s Christians are in full communion with the Vatican, either as members of the five local churches linked to Rome – the Maronites, the largest group, and the Greek Melkite, Armenian, Syriac and Chaldean Catholics – or of the worldwide Roman Catholic Church itself.