One killed in Lebanon protest over anti-Islam film 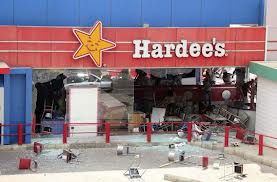 One demonstrator was killed and two others were wounded in clashes with security forces in the northern Lebanese city of Tripoli on Friday in protests over a film insulting the Muslim Prophet Mohammad and against the pope’s visit to Lebanon.

A security source said the man was killed as protesters tried to storm a government building. Earlier, a U.S. fast food restaurant was set alight. Twelve members of the security forces were wounded by stones thrown by protesters, the source said.

The U.S.-made film has sparked violent protests in Libya, where the U.S. ambassador and three other Americans were killed, and in Egypt, Yemen and Sudan and there are fears the demonstrations could spread to other Muslim countries.

The protests coincided with Pope Benedict’s arrival in Lebanon for a three-day visit.

Lebanese security forces had earlier opened fire after protesters torched a fast food restaurant in Tripoli and threw rocks at a state building, shouting anti-American slogans and chanting against the pope’s visit to Lebanon.

A Reuters journalist at the scene saw hundreds of protesters dodging gunfire and teargas as they hurled stones at security forces in armored vehicles. Protesters chanted “We don’t want the pope,” and “No more insults (to Islam)”.

photo: Debris and damage is seen at a Hardee’s fast food outlet after protesters set the building on fire in Tripoli, northern Lebanon September 14, 2012. — Reuters pic