International community: Gaddafi has lost all legitimacy, must go now 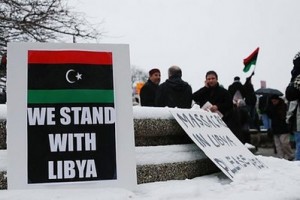 The U.N. Security Council unanimously imposed travel and asset sanctions on Libyan leader Muammar Gaddafi and close aides, ratcheting up pressure on him to quit before any more blood is shed in a popular revolt against his rule.

It also adopted an arms embargo and called for the deadly crackdown against anti-Gaddafi protesters to be referred to the International Criminal Court for investigation and possible prosecution of anyone responsible for killing civilians.

The 15-nation council passed the resolution hours after Gaddafi’s police abandoned parts of the capital Tripoli to the revolt that has swept Libya and the United States bluntly told him he must go.

In the oil-rich east around the second city of Benghazi, freed a week ago by a disparate coalition of people power and defecting military units, a former minister of Gaddafi announced the formation of an “interim government” to reunite the country.

To the west in Tripoli, the 68-year-old Brother Leader’s redoubt was shrinking. Reuters correspondents found residents in some neighbourhoods of the capital barricading their streets and proclaiming open defiance after security forces melted away.

Western leaders, their rhetoric emboldened by evacuations that have sharply reduced the number of their citizens stranded in the oilfields and cities of the sprawling desert state, spoke out more clearly to say Gaddafi’s 41-year rule must now end.

“When a leader’s only means of staying in power is to use mass violence against his own people, he has lost the legitimacy to rule and needs to do what is right for his country by leaving now,” an aide to U.S. President Barack Obama said of phone talks with German Chancellor Angela Merkel over Libya.

U.S. Ambassador to the United Nations Susan Rice said the Security Council measures against Gaddafi and 15 other Libyans, including members of his family, were “biting sanctions” and that all those who committed crimes would be held to account.

“Those who slaughter civilians will be held personally accountable,” Rice told the council after the vote. Speaking to reporters later, she praised the council’s “unity of purpose”.

The death toll from 10 days of violence in Libya is estimated by diplomats at about 2,000.

Talk of possible military action by foreign governments remained vague, however. It was unclear how long Gaddafi, with some thousands of loyalists — including his tribesmen and military units commanded by his sons — might hold out against rebel forces comprised of youthful gunmen and mutinous soldiers.

“It’s about staying alive. (Gaddafi’s) time is over,” he said. “But how much damage he will cause before leaving is the question.”

One key element in the opposition’s efforts to unseat him may be tribal loyalties, always a factor in the desert nation of six million and one which Gaddafi, despite official rhetoric to the contrary, tended to reinforce down the years.

His former justice minister Mustafa Mohamed Abud Ajleil, now gone over to the opposition in Benghazi, was quoted by the online edition of the Quryna newspaper as saying that an interim government, whose status remained unclear, would “forgive” his large Gaddadfa tribe for “crimes” committed by the leader.

Such declarations may be intended to erode Gaddafi’s efforts to rally supporters into a do-or-die defence of the old guard.

Some of those closest to Gaddafi have been deserting him and joining the opposition. On Saturday, Libya’s envoy to the United States told Reuters he backed Abud Ajleil’s caretaker team — though it was unclear how much popular support that would have.

One of Gaddafi’s sons, London-educated Saif al-Islam, again appeared on television on Saturday to deny that much of Libya was in revolt. But he also said: “What the Libyan nation is going through has opened the door to all options, and now the signs of civil war and foreign interference have started.”

Gaddafi, once branded a “mad dog” by Washington for his support of militant groups worldwide, has been embraced by the West in recent years in return for renouncing some weapons programmes and, critically, for opening up Libya’s oilfields.

While money has flowed into Libya, many people, especially in the long-restive and oil-rich east, have seen little benefit and, inspired by the popular overthrow of veteran strongmen in Tunisia and Egypt, on either side of their country, they rose up to demand better conditions and political freedoms.

Particular condemnation has been reserved for aerial bombing by government forces and for reported indiscriminate attacks by Gaddafi loyalists and mercenaries on unarmed protesters.

“Gaddafi is the enemy of God!” a crowd chanted on Saturday in Tajoura, a poor neighbourhood of Tripoli, at the funeral of a man they said was shot down by Gaddafi loyalists the day before.

Locals had erected barricades of rocks and palm trees across rubbish-strewn streets, and graffiti covered many walls. Bullet holes in the walls of the houses bore testimony to the violence.

The residents, still unwilling to be identified for fear of reprisals, said troops fired on demonstrators who tried to march from Tajoura to central Green Square overnight, killing at least five people. The number could not be independently confirmed.

Libyan state television again showed a crowd chanting their loyalty to Gaddafi in Tripoli’s Green Square on Saturday. But journalists there estimated their number at scarcely 200.

From Misrata, a major city 200 km (120 miles) east of Tripoli, residents said by telephone that a thrust by forces loyal to Gaddafi, operating from the local airport, had been rebuffed with bloodshed by the opposition.

“There were violent clashes last night and in the early hours of the morning near the airport,” one resident, Mohammed, told Reuters. “An extreme state of alert prevails in the city.”

He said several mercenaries from Chad had been detained by rebels in Misrata. The report could not be verified but was similar to accounts elsewhere of Gaddafi deploying fighters brought in from African states where he has long had allies.

Protesters in Zawiyah, an oil refining town on the main coastal highway 50 km (30 miles) west of Tripoli, have fought off government forces for several nights.

At Tripoli’s international airport, thousands of desperate foreign workers besieged the main gate trying to leave the country as police used batons and whips to keep them out.

Britain and France followed the United States in closing their embassies. Britain sent in air force troop carriers to take some 150 oil workers out of camps in the desert.

Libya supplies 2 percent of the world’s oil, the bulk of it from wells and supply terminals in the east. The prospect of it being shut off — as well as speculation that the unrest in the Arab world could spread to the major exporters of the Gulf — has pushed oil prices up to highs not seen in over two years.