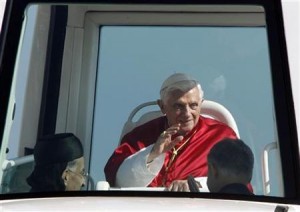 Beirut, Lebanon – Pope Benedict urged Middle Eastern Christians on Sunday to work for peace and against “the grim trail of death and destruction” in the world, in a sermon delivered in Lebanon as civil war raged in neighbouring Syria.

Benedict was speaking at an open-air Mass on Beirut’s Mediterranean seafront attended by 350,000 worshippers, according to the organisers’ estimate, and leaders of Lebanon’s Christian and Muslim communities including from militant Shi’ite group Hezbollah.

Peace between warring factions and among the many religious groups in the Middle East has been a central theme of his visit to Lebanon, along with his call to Christians not to leave the region despite war and growing pressure from radical Islamists.

Lebanon, torn apart by a 1975-1990 sectarian civil war, is a religious mosaic of more than four million people whose Muslim majority includes Sunnis, Shi’ites, Alawites and Druze. About a third of the population is Christian, divided into more than a dozen churches.

“In a world where violence constantly leaves behind its grim trail of death and destruction, to serve justice and peace is urgently necessary,” Benedict said at the Mass, praying for “Middle East servants of peace and reconciliaton”.

“This is an essential testimony which Christians must render here, in cooperation with all people of good will,” he said.

Benedict appealed on Friday for an end to the import of weapons into Syria, branding it a “grave sin” and saying a halt to the arms flow could help end the civil war.

Activists say more than 27,000 people have been killed in Syria’s 18-month-old mainly Sunni Muslim uprising against President Bashar al-Assad, who belongs to the minority Alawite sect that grew out of Shi’ite Islam.

Few of Syria’s Christians, about 10 percent of Syria’s population, have joined the uprising against Assad, fearing that it could bring hostile Islamists to power in Damascus.

Politicians from all sectors of multi-faith Lebanon attended the Mass, held on reclaimed land next to the port. Leaders of the country’s main religious all assured the Vatican of their support for the visit in advance.

With no shade from the hot sun for the crowd, many fanned themselves as temperature rose over 30 degrees centigrade (86 Fahrenheit). The 85-year-old pope was seen mopping sweat from his forehead at one point although the altar was under a canopy.

Red Cross workers carried away at least two worshippers who fainted from the heat halfway through the celebration.

Many in the crowd wore white caps bearing the motto of the visit, “salami o-tikum!” (Arabic for “my peace I give to you”), a phrase the pope has repeated in several speeches.

Cedars of Lebanon, the country’s symbol, featured on a white backdrop to the altar where Benedict presided over Mass, and on white capes worn by prelates of the Maronite Church, the largest of six Lebanese Christian churches linked to the Vatican.

Prelates from other Eastern Catholic churches stood out in their distinctive gold or black vestments, in contrast to the green chasuble worn by the pope. Hymns in Arabic added a local touch to the Gregorian and classic Catholic works being sung.

There were some pre-visit concerns about security because of a wave of protests across the Muslim world against an anti-Islam film produced in the United States. One protester was killed on Friday in violence in the northern Lebanese city of Tripoli.

Worshippers at the Mass said they were grateful the pope had come to Lebanon.

Eli Baalina, 17, a Maronite Christian, said the visit “came at a perfect time, when things were heating up a bit”.

“He gave us a chance to stop and think about the bigger things in life,” he said. “It’s a good chance to reflect on the things like sectarianism and extremism, things that we all need to work to change about ourselves in this region.”

A Filipino maid named Julianne, 31, said: “Everyone thinks the Middle East is only about Muslims, but there is a big Christian community and we should celebrate too.”

Several in the crowd were heartened by the pope’s repeated calls for Christians to stay in the Middle East, where war, emigration and discrimination have cut their ranks to 5 percent of the population now compared to 20 percent a century ago.

“His message is to give us pride and encouragement that it is worth the effort to work for coexistence and understanding and to ensure Christians remain here,” said Lebanese Maronite Silva Mansour, here with her husband and one-month-old baby.

The German-born pontiff conducted the Mass in French and Latin and lay people also offered prayers in Arabic, Armenian, Greek and English.

Photo: Pope Benedict XVI waves to the faithful from his Popemobile upon his arrival to conduct an open-air mass service at Beirut City Center Waterfront September 16, 2012. REUTERS/Sharif Karim