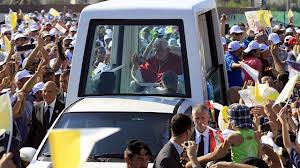 Pope Benedict XVI made a sweeping appeal Sunday for peace in Syria and the Middle East, decrying the violence “which generates so much suffering.”

Speaking at an open-air Mass before a huge crowd, he urged the international community and Arab countries in particular to find a solution to end the conflict in neighboring Syria.

“Why so much horror? Why so many dead,” Benedict said, lamenting that “the first victims are women and children.”

With pilgrims from across the Middle East in the crowd he said Christians must do their part to end the “grim trail of death and destruction” in the region.

“I appeal to you all to be peacemakers,” Benedict said.

Benedict spoke from an altar built on land reclaimed with debris from Lebanon’s 1975-1990 civil war, pressing ahead with his call for peace and reconciliation between Christians and Muslims.

The Rev. Federico Lombardi, a Vatican spokesman, said local organizers put the crowd at some 350,000 people.

Benedict said that justice and peace are needed in building “a fraternal society, for building fellowship.”

The 85-year pope, wearing green vestments, appeared to be holding up well in the Mediterranean heat.

The crowd cheered and waved tiny Vatican and Lebanese flags as Benedict arrived in his bullet-proof popemobile at the Mass site on the Beirut waterfront.

Benedict has been appealing for tolerance and religious freedom.

At a meeting with young people Saturday evening, the pope said he admired the courage of Syrian youth and that he did not forget their suffering.

The papal visit comes amid soaring sectarian tensions in the region, exacerbated by the conflict in Syria, which is in the throes of an 18-month-old civil war.