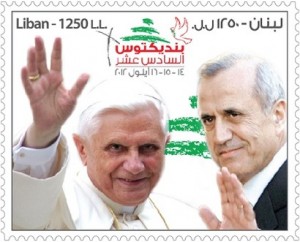 The brutal civil war in Syria and the killing of the U.S. ambassador to Libya have given a sense of urgency to Pope Benedict XVI’s trip this week to Lebanon, a mission he describes as a pilgrimage of peace for the entire region.

The three-day visit starting Friday will take the pope to the nation with the largest percentage of Christians in the Middle East — nearly 40 percent of Lebanon’s 4 million people, with Maronite Catholics the largest sect.

The Vatican initially stressed Benedict’s push for inter-faith dialogue in the wake of Ambassador Chris Stevens’ death in a mob attack on the consulate in Benghazi. But on Thursday the Holy See toughened its response, firmly condemning the attack and saying nothing can justify such acts of terrorism or violence.

The papal visit comes amid fears that Syria’s conflict might spill over to Lebanon. Clashes in Lebanon between Syrian groups over the past months have claimed the lives of more than two dozen people and left scores wounded. The Christian community in Lebanon is divided between supporters and opponents of Syrian President Bashar Assad.

“I am not unaware of the often dramatic situation endured by the populations of this region which has been torn for too long by incessant conflict,” Benedict said in his weekly remarks to pilgrims Sunday. He assured them the visit “comes under the sign of peace.”

Lebanese authorities are enacting stringent security measures, suspending weapons permits except for politicians’ bodyguards and confining the visit to central Lebanon and the northern Christian areas.

Several Arab countries, including Saudi Arabia and Qatar, have recently urged their citizens not to visit Lebanon because of security concerns over the recent violence.

But the pope’s spokesman, the Rev. Federico Lombardi, told reporters this week that the trip has never been in question and that Benedict has made clear he expects to be warmly welcomed. The government has declared Saturday an official holiday in Benedict’s honor and given the day off to tens of thousands of workers and students so they can greet him.

Benedict, the third pope to visit Lebanon after Paul VI in 1964 and John Paul II in 1997, will be addressing concerns by the region’s bishops over the plight of Christians in the Middle East. War, political instability and economic hardships have driven thousands from their traditional communities dating to early Christianity in the Holy Land, Iraq and elsewhere.

Some clerics in the region have blamed the Israeli occupation of Palestinian territories; others have said the rise of “political Islam” has become a threat to their well-being.

The turmoil stemming from the Arab Spring has deeply unsettled the Middle East’s Christian population, which fears being in the cross-fire of rival Muslim groups.

The 85-year-old Benedict is likely to get a full briefing on the region’s problems when he meets with Lebanese political and religious leaders and his own bishops from the region.

Vatican spokesman Lombardi did not rule out that the pope would meet some supporters of Hezbollah, a Shiite militant group that has risen steadily over the decades from anti-Israel resistance group into Lebanon’s most powerful military and political force. The U.S. considers Hezbollah a terrorist organization. Lombardi declined to say what the Vatican’s position is on the group.

Syria’s Assad is a crucial ally of Hezbollah and Iran its most important patron.

Lombardi said Benedict may also meet with Syrian refugees, but it is not confirmed. The U.N. refugee agency said Tuesday that the number of Syrian refugees seeking its help now tops a quarter-million, with at least 66,915 in Lebanon.

The main public event of the visit is Mass on Sunday on the Beirut waterfront.

The Lebanese army has imposed a 10-day ban on gliding over the coastal town of Jounieh and the mountain area of Harisa and its surroundings. Harisa, famous for its giant statue of the Virgin Mary, is the site of the Vatican ambassador’s residence, where Benedict will reside.