Egyptian president ‘did not discuss boosting ties with Iran’ 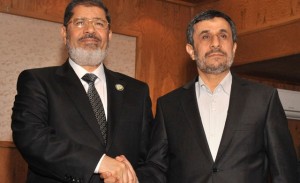 Egyptian President Mohammed Mursi made no mention of resuming ties with Iran during a recent visit to Tehran, his spokesman Yassir Ali said on Sunday, denying statements by Iranian officials.

“The meeting between President Mohamed Morsi and his Iranian counterpart (Mahmoud) Ahmadinejad did not broach the subject of boosting the level of representation or of opening an embassy,” said Ali, quoted by the state-owned daily Al-Ahram.

Mursi’s attendance of the Non-Aligned Movement (NAM) summit in Tehran was the first time an Egyptian head of state had set foot in Iran since the two countries broke off diplomatic ties in the wake of the 1979 Islamic revolution there.

The two countries have since maintained interests sections in their respective capitals.

According to Ali, the two leaders agreed to hold “more dialogue to examine common affairs, including regional issues.”

The Islamic republic had several times sought to normalize relations with Egypt since the overthrow of president Hosni Mubarak in 2011.

Mursi hails from Egypt’s powerful Muslim Brotherhood and says he is seeking broader relationships in the Middle East, including with Tehran. But he has so far reacted with caution to Iran’s overtures.

Meanwhile, Bahrain has demanded an apology from Iran after an official interpreter reportedly replaced the word “Syria” with “Bahrain” in a speech by Mursi at the opening of the Non-Aligned Movement in Tehran.

The foreign ministry in Manama on Saturday filed an “official protest memorandum” with Tehran’s charge d’affaires over the “misrepresentation made by Iranian State Television” during Mursi’s speech on Thursday.

Bahrain “requested the Iranian government apologize for this act, and take the necessary action to correct the breach and ensure that actions like this one don’t happen again,” the ministry’s demarche said, according to a statement.

Mursi’s speech is considered to be critical to that of the regime of Syrian President Bashar al-Assad, a key regional ally of Tehran.

“The revolution in Egypt is the cornerstone for the Arab Spring, which started days after Tunisia and then it was followed by Libya and Yemen and now the revolution in Syria against its oppressive regime,” Mursi told delegates at the summit, prompting a walk-out by the Syrian delegation.

Manama said that the interpreter on Iran’s state television replaced the word Syria with Bahrain several times, although Mursi, who spoke in Arabic, did not mention Bahrain at all.

The Bahraini statement did not name the television channel that it said changed the words, as several state channels transmitted Mursi’s speech live, including two in Farsi: IRINN and Channel One.

IRINN broadcast the speech using the official interpretation of the summit, which clearly mentioned Syria, as verified by AFP.