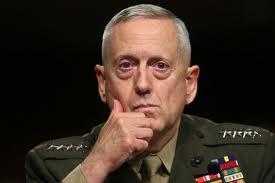 Lebanese army chief Jean Kahwaji met on Sunday US Central Command (USCENTCOM) Commander General James N. Mattis and discussed with him Lebanon and regional issues, according to a statement issued by the US Embassy in Beirut.

The statement said that General Mattis noted “appreciation for the strong and sustained military cooperation between the two countries and emphasizing U.S. support for Lebanon’s initiatives to implement its obligations under United Nations Security Council Resolution 1701.”

UNSCR 1701 helped solidify a ceasefire for the July 2006 war between Lebanon’s Hezbollah and Israel.

Furthermore, he “underscored USCENTCOM’s continuing effort to strengthen the capacity of the Lebanese Armed Forces, recognizing its importance, as Lebanon’s sole legitimate defense force in securing Lebanon’s borders and defending the sovereignty and independence of the state,” according to the statement.