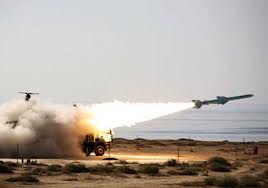 Iran’s president on Tuesday unveiled an upgraded version of a short-range surface-to-surface ballistic missile just weeks after it was test-fired, the country’s state-media reported.

The missile reflects Iran’s improved military capabilities aimed at “defense” and “deterrence,” Mahmoud Ahmadinejad told a group of defense officials at the ceremony presenting Fateh-110, or Conqueror, according to state TV.

Iran considers both the United States and Israel as potential adversaries. Neither country has ruled out a military strike against Iran’s nuclear program, which they claim is aimed at developing nuclear weapons. Iran says its program is for peaceful purposes.

The official IRNA news agency said in a report Tuesday said the new version of Fateh-110 has a quicker launch capability, a longer life and can be used in adverse weather conditions but gave no other details. The missile has been in service in Iran over the past decade.

Iran claimed earlier in August that it successfully test-fired the missile, saying at the time that Fateh-110 has an improved accuracy to strike land and naval targets within a 300 kilometer (185 mile) range.

Since 1992, Iran has tried to set up a self-sufficient military program.

The country’s military leaders have said they believe future wars will be air- and sea-based and Tehran has sought to upgrade its air defense systems and naval power in anticipation of such a possibility.

Iran has also been pushing to upgrade its missiles, which already can target Israel and U.S. bases in the Middle East. The Pentagon released a report in June noting significant advances in Iranian missile technology, acknowledging that the Islamic Republic has improved the accuracy and firing capabilities of its missiles.

At the ceremony marking the national day of Iran’s defense industry, Ahmadinejad also unveiled several other latest Iranian-made weapons, such as a naval diesel engine, a mortar launcher, a monitoring military intelligence system and tactical SUVs.