EU Probes Cigarette Deal That May Have Aided Syria 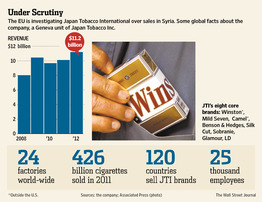 The European Union is investigating whether its Syrian sanctions were violated by the sale of cigarettes to a firm linked to cousins of Syrian President Bashar al-Assad, according to corporate documents seen by The Wall Street Journal.

The sale by a Swiss-based unit of Japan Tobacco Inc. in May 2011 went to a firm then at least partly owned by the Makhlouf family, according to the documents. The Makhloufs, first cousins of Mr. Assad, are helping finance his bloody crackdown on the Syrian uprising, according to both the U.S. and the EU.

Syrian dissidents said this sale and a larger one involving millions of cartons to the Syrian state tobacco company provided the regime with a cash infusion at a time of growing economic isolation, because the cigarettes could be resold for much more than they cost.

Businessman Rami Makhlouf is the scion of the family and widely regarded as Syria’s richest man. The EU placed financial sanctions on him, as well as on his brothers Iyad and Ihab, on May 23, 2011, for their alleged role in helping to finance Mr. Assad’s actions.

The EU’s antifraud office, OLAF, confirmed it is investigating the business of JTI, which is based in Geneva, but declined to provide any details.

Guy Côté, a spokesman for JTI, said it strictly adheres to all EU sanctions and is cooperating with the investigation.

“We have not processed any sales to Syria Duty Free since May 19, 2011,” he said. This would have been four days before the EU imposed sanctions on the Makhloufs.

Mr. Côté said that the EU has never banned trade with Syria Duty Free Shops itself, and that Rami Makhlouf was removed from the list of that firm’s owners in 2008.

“After the arrival of that single shipment, we learned that one of the owners was on the sanctions list,” Mr. Côté said. He said JTI stopped all cigarette sales to anyone in Syria this past February.

Syria Duty Free Shops has subsequently been sold to a Kuwaiti company, according to Arab media reports.

JTI parent Japan Tobacco Inc. is 50%-owned by the Japanese government. An official at the Japanese Foreign Ministry’s Middle East section said that “we are not aware of” an EU investigation or JTI’s cigarette shipments to Syria.

A Syrian embassy spokeswoman in Washington declined to comment. Attempts to reach Rami Makhlouf were unsuccessful.

Japan has imposed its own Syrian sanctions. It placed sanctions on Rami Makhlouf and his father in the second half of 2011.

U.S. and EU sanctions against Syria focus especially on energy and finance.

The Journal reported last week that the Syrian regime had laid plans to use Russian banks as part of an effort to avoid these sanctions and export some of its oil to raise hard currency.

Some fighters in the rebel Free Syrian Army also are paid in cigarettes. “If you can’t provide your people with cigarettes, they won’t stay with you,” said Louay Sakka of the Syrian Support Group, which lobbies for the Free Syrian Army.

On the same day in May 2011 when JTI cigarettes were delivered to the Makhlouf-linked company at the Syrian port of Latakia, JTI delivered 4.2 million cartons of Winstons to Syria’s state-owned tobacco company, General Organization of Tobacco, or GOT, according to the documents seen by the Journal.

GOT wasn’t on the EU’s sanctions list at the time; it has since been added.

GOT paid roughly 24 cents a pack—an average reduced by some 160,000 10-pack cartons of Winstons provided free to the state company—according to the documents, which JTI didn’t dispute.

Industry analysts said Syria could have reaped profits of more than $100 million if it resold the cigarettes at home or in other Mideast markets for around $3 a pack, which they called a common price in the region.

The analysts said it isn’t unusual for companies to sell products in developing nations at low prices to build brand recognition, but questioned how JTI could make any money selling cigarettes so cheaply and providing some free.

“In international markets, where there are reasons to be cautious, you could see sales [by manufacturers] at more like 50 cents per pack,” said David Sweanor, a University of Ottawa professor who studies the trade. “This sure looks very lucrative for anyone who brought this product into the country.”

Mr. Côté said JTI “prices its products for specific markets based on a number of commercial and economic variables, such as competitor price points, commercial strategy, market demand, cost of living indices and internal costs, to name just a few.”

He added: “JTI’s pricing decisions for products that were sold for the Syrian market were made in line with standard commercial practices.”

Mr. Côté disputed that Syria could resell Winstons internally for $3 a pack, saying the retail price there in recent years was $1 or less.

An executive at a competing tobacco company said Winstons sell inside Syria for $1.50 a pack, up from $1.05 before the uprising.

JTI and its Mideast distributor, Cyprus-based IBCS Trading and Distribution Co., began doing business with Syria well before the revolt began in March 2011.

In March 2010, JTI shipped some 6.75 million cartons of Winstons to Syria’s state-owned company; roughly 250,000 cartons were free, bringing the average price down to 26 cents a pack, according to the documents.

“The Assads…generate revenues from most businesses inside Syria. Rami Makhlouf has been at the center of this,” said Andrew Tabler, a Syria expert at the Washington Institute for Near East Policy.

Over the past decade, Mr. Makhlouf was granted exclusive licenses to develop a telecommunications company and airline, in addition to the duty-free shops. He and his family also have owned large bank, real-estate and media holdings.

Last year, he said he was shedding most holdings to support Assad pledges to open up the economy. Opposition forces say he remains active in businesses that support Mr. Assad.

In 2008, the U.S. Treasury barred American companies from doing business with Rami Makhlouf, the first foreign executive blacklisted on grounds of alleged corruption and intimidation of foreign businesses.

In a 2008 interview with the Journal, Mr. Makhlouf denied any involvement in corrupt activities. He also said he would mask his holdings to evade international sanctions.