HSBC Holdings Plc (HSBA)’s head of group compliance, David Bagley, told a Senate hearing he will step down amid charges the bank gave terrorists, drug cartels and criminals access to the U.S. financial system by failing to guard against money laundering.

Bagley was among at least six HSBC executives who testified before the Senate’s Permanent Subcommittee on Investigations today after the panel released a 335-page report describing a decade of compliance failures by Europe’s biggest bank. London- based HSBC enabled drug lords to launder money in Mexico, did business with firms linked to terrorism and concealed transactions that bypassed U.S. sanctions against Iran, Senate investigators said in the report.

“As I have thought about the structural transformation of the bank’s compliance function, I recommended to the group that now is the appropriate time for me and for the bank for someone new to serve as the head of group compliance,” Bagley said. “I have agreed to work with the bank’s senior management towards an orderly transition of this important role.”

Irene Dorner, president and chief executive officer of HSBC North America Holdings Inc., was also among executives who appeared before the committee.

“The problem here is that some international banks abuse their U.S. access,” Senator Carl Levin, the Michigan Democrat who heads the subcommittee, said at the start of the hearing. “The end result is that the U.S. affiliate can become a sinkhole of risk for an entire network of bank affiliates and their clients around the world playing fast and loose with U.S. rules.”

Senate investigators focused on New York-based HSBC Bank USA NA as a “nexus” for U.S. dollar services and transfers. Senator Thomas Coburn of Oklahoma, the subcommittee’s senior Republican, pointed out that HSBC isn’t alone and that “similar problems exist at other banks.” 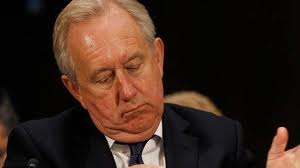 Senior executives from HSBC, credited with providing millions of pages of documents for the investigation, expressed contrition and promised changes in response to the findings after Levin said the bank’s failings should provide sufficient cause for U.S. regulators to consider revoking its charter.

“I recognize that there have been some significant areas of failure,” Bagley said at the hearing. “HSBC has fallen short of our own expectations, and the expectations of our regulators.”

Paul Thurston, head of HSBC’s retail banking and wealth management unit, said the company will close the Mexico unit’s U.S. dollar accounts in the Cayman Islands, a jurisdiction that Levin said is “known for secrecy and money laundering.”

The lender ignored links to terrorist financing among its customer banks, including Riyadh, Saudi Arabia-based Al Rajhi Bank, which had ties to terror groups through its owners, according to the report. Internal documents show HSBC decided to cut ties with the bank before reversing itself under pressure from Al Rajhi, which received shipments of $1 billion in cash from HSBC’s U.S. operation from 2006 to 2010, according to the report.

HSBC’s U.S. unit “offers a gateway for terrorists to gain access to U.S. dollars and the U.S. financial system,” according to the report. “HSBC has a legal obligation to take reasonable steps to ensure it is not dealing with banks that may have links to or facilitate terrorist financing.”

Some of HSBC’s alleged dealings with state sponsors of terror and Mexican drug dealers were earlier reported by Bloomberg Markets magazine.

An article in the July 2005 issue documented the bank’s ties to Iran, Libya, Sudan and Syria. It reported the U.S. Treasury Department had fined HSBC for a transfer in April 2000 of $100,000 benefiting the Taliban, which at the time was running Afghanistan, and providing Osama bin Laden with the base from which he plotted the Sept. 11 attacks.

Then-HSBC CEO Stephen Green wrote a letter in response, saying, “This was a singular and wholly irresponsible attack on the bank’s international compliance procedures.”

A story in the magazine’s August 2010 issue reported that an investigation by the Mexican Finance Ministry found that drug dealers used shell companies to open accounts at HSBC.

HSBC bolstered its presence in Mexico in 2002 when it bought the nation’s fifth-largest bank, Grupo Financiero Bital SA, better known as Bital, which Senate investigators found had a history of deficiencies in anti-money-laundering controls. At the time, Bital had “no recognizable compliance or money- laundering function,” Bagley wrote in an internal e-mail.

From 2000 to 2009, HSBC gave its lowest risk rating to Mexico “despite overwhelming information indicating that Mexico was a high-risk jurisdiction for drug trafficking and money laundering,” Senate investigators wrote. HSBC’s Mexican clients included casas de cambio, or currency-exchange firms, that were identified in U.S. Treasury Department warnings as hubs for laundering drug money.

Wells Fargo & Co. (WFC) (WFC)’s Wachovia Bank unit paid $160 million in 2010 to resolve a criminal probe that cartels were using such exchange houses to launder cash through the lender.

HSBC’s Mexican bank shipped $7 billion in bulk cash to the firm’s U.S. bank in 2007 and 2008. That was more than all HSBC affiliates and other banks in Mexico and left U.S. and Mexican authorities concerned that the volumes could only be supplied by the illegal drug trade, according to the report.

In 2007, the head of Latin America compliance sent an e- mail to a colleague condemning the Mexican affiliate for “rubber-stamping unacceptable risks,” according to the report.

“What is this, the School of Low Expectations Banking?” the executive, John Root, wrote in the e-mail.

Leopoldo Barroso, a former HSBC anti-money-laundering director, told company officials in an exit interview that he was concerned about civil and criminal sanctions and that there were “allegations of 60 percent to 70 percent of laundered proceeds in Mexico” going through HSBC’s affiliate, according to the report.

The report also cited HSBC’s violations of Treasury Department sanctions on dealings with Iran, which the U.S. is working to isolate from the global banking system. The sanctions, enforced by the Office of Foreign Assets Control, or OFAC, seek to punish Iran for operating a nuclear program outside international inspection. Internal communications show the U.S. bankers were aware that some of the transactions were linked to Iran in violation of U.S. sanctions.

An outside audit by Deloitte LLP showed that 25,000 transactions totaling more than $19.4 billion involved Iran, according to the report. Of those, as many as 90 percent passed through the bank’s U.S. accounts with no disclosure of ties to Iran, the report shows. Senate investigators documented similar transactions from a list of other prohibited jurisdictions including North Korea, Cuba, Sudan and Burma.

HSBC has said that it’s cooperating with investigations by the Justice Department, Manhattan District Attorney’s Office, Federal Reserve and the Office of the Comptroller of the Currency into possible Iran sanctions violations. It’s also cooperating in unrelated probes by the Justice Department and Internal Revenue Service into whether it helped Americans evade taxes through HSBC India.

The bank may face a fine from regulators of as much as $1 billion according to some estimates, James Antos, an analyst at Mizuho Securities Asia Ltd. wrote in a note to investors today.

“This is an overhang that will be impossible to ignore when results are announced” for HSBC’s first half on July 30, wrote Antos.

Many of the Iran transfers described in the Senate report involved so-called U-turn transactions, which were allowed under Treasury regulations before November 2008. Those rules let U.S. banks process dollar payments involving Iran that began and ended with non-Iranian institutions.

In 2005 and 2006, HSBC processed about 1,800 U-turn transactions through a correspondent account at JPMorgan Chase & Co. (JPM) (JPM) The report quoted an e-mail from HSBC Middle East Deputy Chairman David Hodgkinson, who wrote that HSBC’s U.S. unit was “unwilling to process them for reputational-risk reasons.”

The Senate probe also accuses the OCC, the primary regulator of HSBC’s U.S. bank, of failing to treat repeated findings of violations in money-laundering controls with sufficient weight. The OCC tolerated severe money-laundering deficiencies “for years,” according to the report, while HSBC’s examiners were suggesting action to their supervisors at the agency.

“We agree with the concerns reflected in each of the recommendations and will take actions in response,” Comptroller of the Currency Thomas Curry said in testimony prepared for the hearing.

Anti-money-laundering deficiencies will threaten banks’ safety-and-soundness ratings, as recommended by the report, he said.