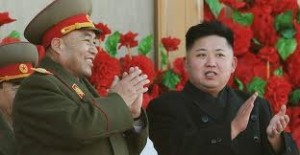 North Korean leader Kim Jong-un was named marshal of the army, the country’s top military rank, in a move that adds to his glittering array of titles and cements his power in the isolated and impoverished state that has a 1.2 million strong military.

The decision was made on Tuesday and reported on Wednesday by North Korea’s state media. It comes after the country’s top general was purged.

The new title completes Kim Jong-un’s elevation following the death of his father Kim Jong-il in December. He already heads the Workers’ Party of Korea and is First Chairman of the National Defence Commission.

Kim — believed to be in his late 20s — has steadily worked to impose his own stamp on the top leadership of North Korea, and on Sunday ousted Vice Marshal Ri Yong-ho, the country’s leading military figure, who was seen as close to Kim Jong-il.

Key to Kim’s rule is a lineage that stretches back to his grandfather, Kim Il-sung, who founded the North Korea and is still revered as its eternal president.

“The personality cult surrounding Kim family has been really shifted to Kim Jong-un,” said Daniel Pinkston of the International Crisis Group, who visited North Korea earlier this month and spoke to reporters in the South Korean capital on Tuesday.

The North suffered a famine in the 1990s, when Kim Jong-un’s father ruled, and its economy was devastated by the collapse of the Soviet Union, a major backer. It has been almost completely isolated by international sanctions over its nuclear and missile programs.

Kim Jong-un’s brief term in office since his father’s death is, at least on the surface, a sharp change from the former leader’s dour rule which took North Korea deeper into isolation, abject poverty and large-scale political repression.

Once the official mourning period was over, the youngest Kim to rule North Korea was seen laughing with fusty old generals, gesticulating in delight at a military parade and, the biggest shock of all, speaking in public. Most North Koreans went to their graves never having heard Kim the elder speak.

Both Kim Jong-il and Kim Il-sung were named Generalissimos of the North Korean army, one of the world’s largest.

Ri’s removal was widely seen as a purge and was followed by the promotion of relatively unknown military man Hyon Yong-chol to the rank of vice marshal.

Experts says the latest moves have more to do with a shifting of the guards surrounding the young leader than any fundamental changes in policy.