Dark images of horror and despair smuggled out of Syria 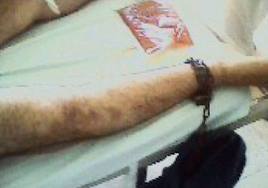 Beirut, Lebanon – The corpses lay strewn in the restive Syrian city of Douma, all slain in what residents there call a government-backed “massacre.”

The scene in the aftermath of the assault, punctuated by images of grief-stricken people and blood-covered pavement, was recorded last month by opposition activists who braved the wrath of Syrian security and slipped into the suburban Damascus city to bear witness to the tumult with their cameras.

The three-man media team moved about the pockmarked urban battleground in shadows and whispers. Edging step-by-step and block-by-block, they hugged buildings’ walls to avoid catching the eyes of rooftop snipers. But they would pick up the pace amid bursts of gunfire.

That was at the end of June. The intense bombardment of Douma by Syrian President Bashar al-Assad’s forces in the days that followed trapped the activists for more than a week, with government forces blocking the routes out of town and shelling forcing them to take shelter.

The footage — just delivered to reporters in Lebanon — also highlights the resolve of a guerrilla force of activist-journalists: brave souls who’ve risked their lives since March 2011 to record examples of the regime’s actions.

The carnage is the latest example of what activists say is relentless abuse against civilians by al-Assad’s security apparatus over the past 16 months.

Douma, a major city in the province of Rif Damashq — meaning Damascus countryside, which includes the suburbs that surround the capital city — has been consumed by bloodshed since the protests last year morphed into a nationwide uprising against the regime.

These latest sights, recorded by the activists at a dingy building in the dark of night, bear witness to the grim conflict in cities, towns and villages across Syria.

The people seen dead in the scene were among 45 people killed in an attack. Residents say Syrian security forces raiding a building in search of weapons wiped out members of several families.

One image shows a little girl sprawled among the dead, many of the bodies covered in bloody funeral sheets.

A man points to a body and says “he was executed, a civilian.” He points to a second corpse and says, “This is his cousin, shot because he tried to save him.”

Another man said security forces ordered men and women into two rooms and executed them, one after the other.

But the aftermath rings true for Syrians caught in the maelstrom of what is now called a civil war and the sight has become routine in areas where resolute residents have not buckled under to regime soldiers and their militia allies.

Residents prepared the bodies for burial by unceremoniously wrapping up the dead in funeral sheets and removing them from the building where they were found.

It is only now that the activists who filmed the grisly scenes were able to get the footage to Lebanon.

The risk, the activists say, is worth it. Syrians activists say the world needs to get one more glimpse of the horror and despair engulfing Syria.