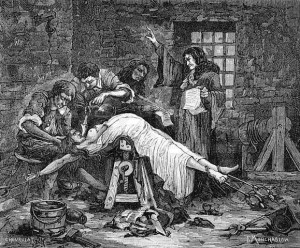 Syrian President Bashar Al-Assad has taken out the torture toolkit his father once employed as he engages in the most widespread and appalling abuses his country has suffered in decades in an effort to put down a year-old rebellion.

“In terms of the number of people being tortured, and the level of torture and the type, of which the more gruesome are now being inflicted, we are seeing the return of the very dark days of the 1970s and 1980s, when Bashar’s father Hafez was in power,” Neil Sammonds, Syria researcher at Amnesty International, told The Media Line.

Sammands is one of the authors of a report, “I Wanted to Die:” Syria’s Torture Survivors Speak Out, which the London-based human rights organization released on Wednesday and documents a wide range of practices the regime has used against its citizens since rebellion broke out.

All told, the report identified 31 methods of torture and other ill-treatment. Many of them, it said, were methods that had not been used in years as the incidence and severity of torture declined when Bashar Al-Assad took over Syria after his father’s death in 2000. The younger Al-Assad presided over a period of liberalization when he became president, but quickly backtracked. nevertheless, he had until a year ago faced little domestic unrest.

The report comes as Damascus launches an assault on rebel redoubts in the north that have left scores dead and accusations of widespread abuse and torture. The Local Coordination Committees of Syria, a network of opposition activists, released footage this week showing men, women and children lying dead in a blood-drenched room, many with their throats slit.

The United Nations said on Tuesday that it would soon deploy human rights monitors in countries bordering Syria to collect eyewitness testimony on atrocities committed in the country.

In its report Amnesty said people are almost invariably beaten and tortured and ill-treated during arrest, often again transportation to detention centers, and routinely once they arrive. Among the victims are children under 18, but in relatively few cases are women targeted for abuse, it said.

Among the methods of torture revived over the last several months, Amnesty said, is shabeh, whereby the victim is hung on a raised hook, handle or door frame, or by manacled wrists, so that his feet hang just above the ground while he is beaten. Researchers found evidence for the frequent use of electric shocks as well as rape and other tortures and ill-treatment of a sexual nature, all of which had largely gone into abeyance.

Among the techniques Amnesty documented is one called the “German Chair,” in which the detainees are tied by their arms and legs to a metal seat, the back of which is moved backwards. That causes acute stress to the spine and severe pressure on the neck and limbs, often resulting in permanent injury.

“I was hanged from the metal handcuffs on my hands attached to the wall. This hugely strained my hands and was very painful,” a man identified only as “Mousa” testified to Amnesty investigators. He said he was held at the Military Intelligence branch in the southern city of Dera’a last October before fleeing the country to Jordan.

“I also suffered the ‘German chair’ torture method and while in that position I was given electric shocks. I was also hanged from the window and my feet did not reach the ground for a few days… By the end of it, I lost my sense of pain – even that caused by electric shocks,” he said.

Amnesty based its conclusions on the extent of torture in Syria on a tiny number of the victims whose testimony was collected in Jordan last month. Investigators met dozens of Syrians, some 25 of whom said they had been tortured or otherwise ill-treated in detention.

Sammands said it was impossible to estimate how many people have been subject to torture in the last months since the government bans human rights groups from entering the country. But, he said, it is quite likely that the number was huge as tens of thousands of Syrians have been arrested.

“I would say that most of them are tortured, which means that tens of thousands have been tortured. Without access to the country, it’s hard to be precise, but we have very few examples of people who have been detained who have not been tortured,” Sammands said.

The Syrian government has insisted that rebels have kidnapped and killed scores of civilians, mutilated their bodies and filmed the corpses in order to libel the regime

Amnesty said it was investigating reports of abuses by opposition groups, including the kidnapping and killing of people apparently because they openly support the government or are members of the armed gangs known as shabiha, which are widely believed to operate on its behalf.

“There are a worrying number of reports of alleged torture and alleged execution of people captured by the opposition,” Sammands said. But, he noted, that there was no evidence of a systematic policy of abuse by opposition leaders as there appears to be by the government in Damascus.

The number of people reported to have died in custody reached 276 as of this month but, Amnesty said, that given that so many Syrians are believed held incommunicado the true figure is likely to be higher.

Amnesty scored the Al-Assad regime’s claims to be reforming the legal system and security arms to prevent abuses. The government ended a five-decade-long state of emergency 11 months ago, but a law enacted shortly afterwards effectively neutralized the impact by extending detention without charge to 60 days and allowing the police to pass their powers of arrest and detention to the country’s multiple security and intelligence agencies. Other legislation grants effective impunity to those who commit torture.