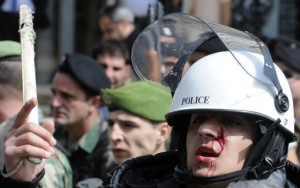 Clashes broke out on Saturday between security forces and students affiliated with the Kataeb party and the National Liberal Party (NLP) who were staging a demonstration against a curriculum proposal for a Lebanese history book in Downtown Beirut near the Grand Serail. Kataeb bloc MP Sami Gemayel on Saturday held the Lebanese cabinet responsible for the clashes.

The Kataeb party is led by former Lebanese President Amin Gemayel while the NLP is led by MP Dori Chamoun.

The debate over a standardized account of Lebanon’s modern history has been ongoing for more than two decades. The Taif Accord, a reconciliation pact passed in 1990 to end the country’s civil war, called for the implementation of a unified curriculum.

Kataeb bloc MP Sami Gemayel on Saturday held the Lebanese cabinet responsible for the clashes that erupted earlier today in Downtown Beirut between security forces and students – who were protesting a curriculum proposal for a Lebanese history book.

The students were affiliated with the Kataeb party and the National Liberal Party (NLP).

During an interview with MTV television station Gemayel said that Saturday’s protest was “the fourth [peaceful] demonstration which the Kataeb party has staged within a month and a half in different areas [of Lebanon].”

“Why were the students aggressively [attacked on Saturday]?” Gemayel inquired.