Annan in Syria, meets with Assad to mediate end to conflict 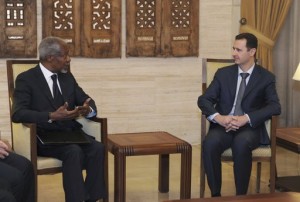 U.N. envoy Kofi Annan met with Syrian President Bashar Assad on Saturday in Damascus during a high-profile international mission to mediate an end to the country’s yearlong conflict, even as activists reported fresh shelling by regime forces that sent families fleeing for safety in the northern province of Idlib. Thick black smoke billowed over the area.

The state-run news agency SANA reported that talks between Assad and Annan had begun but there were no further details on the meeting, aimed at a halting violence that began with crackdowns on mostly peaceful protests but appears to be transforming into a civil war.

The Britain-based Syrian Observatory for Human Rights reported that the government was shelling the Idlib region after tanks moved toward the area in recent days. There was no independent confirmation, but smoke rose into the sky behind some apartment buildings, according to an Associated Press team in the area.

Some families were seen fleeing the violence, clutching their belongings, or taking shelter.

Military reinforcements have been pouring into Idlib for days, including dozens of tanks and armored personnel carriers, activists said. There have been concerns Idlib would be the focus of an offensive following the government recapture of the rebel-held district of Baba Amr in Homs after a bloody, monthlong siege.

The latest diplomatic mission to end the Syrian crisis has faced stumbling blocks even before it began, as the opposition rejected Annan’s calls for dialogue with Assad’s regime Friday as pointless and out of touch after a year of bloodshed.

The dispute exposes the widening gap between opposition leaders who say only military aid can stop President Bashar Assad’s regime, and Western powers who fear more weapons will exacerbate the conflict.

Annan’s visit marks a new international push for peace nearly a year after protesters took to the streets to demand Assad’s ouster, inspired by Arab Spring uprisings in Tunisia and Egypt. Since then, the regime has dispatched snipers, tanks and civilian gunmen to crush dissent. As the death toll mounted, protests have spread, and some have taken up arms to defend themselves and attack government forces.

The conflict is now one of the bloodiest of the Arab Spring, with the U.N. saying more than 7,500 people have been killed. Activists put the number at more than 8,000.

So far, Western powers have declined to intervene. Unlike Libya, where a U.N.-sanctioned bombing campaign helped rebels topple Moammar Gadhafi last year, Syria has key allies in Iran and the Lebanese militant group Hezbollah, and shares a border with the region’s closest American ally, Israel. Outright war in Syria could spark a regional conflagration.

Secretary-General Ban Ki-moon told reporters Friday that Annan’s priority is to immediately halt all fighting by government forces and opposition fighters if not simultaneously, then first by government troops, followed by the opposition.

Ban said a cease-fire should be quickly followed by inclusive political talks to resolve the yearlong conflict.

By phone from Paris, the head of the opposition Syrian National Council told The Associated Press on Friday that Annan was overlooking what the opposition considers the root of the problem: the regime’s use of overwhelming military force to crush dissent.

“Any political solution will not succeed if it is not accompanied by military pressure on the regime,” said Burhan Ghalioun. “As an international envoy, we hope (Annan) will have a mechanism for ending the violence.”

The Syrian National Council has called for foreign military aid, believing it is the only way to stop Assad’s tanks and soldiers from firing on civilian areas. It recently formed a military office to try to coordinate efforts to bring in military aid for armed groups across the country who fight under the name of the Free Syrian Army.

Annan, the former U.N. secretary-general, was appointed last month as the joint special envoy of the United Nations and the Arab League.