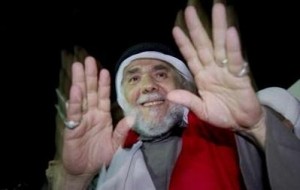 Prominent Bahraini opposition leader Hassan Mushaima has returned from self-imposed exile to the UK, greeted by a crowd of supporters at the airport.

Mr Mushaima, a senior Shia figure considered a radical by many, returned after the Bahraini government dropped charges against him, a move to appease protesters demanding changes.

In another concession, the king sacked four government ministers.

Meanwhile, thousands of demonstrators marched in the capital, Manama, as protests continue for a 13th day.

Mr Mushaima is known for his strong opposition to the ruling Sunni dynasty, and was sentenced in absentia last year on charges of trying to overthrow the government.

He was welcomed by supporters at the airport, where he told the BBC that he wanted genuine democratic reform that could turn Bahrain into a constitutional monarchy.

“We want a real constitution. They’ve promised us (one) before and then did whatever they wanted to,” Mr Mushaima told reporters at the airport.

The BBC’s Owen Bennett-Jones in Manama said that Mr Mushaima’s Haq Movement has a significant following in Bahrain’s Shia community and his return could make a difference to the political situation.

Mr Mushaima has a reputation as being a radical. In the past, he has named members of the royal family as being corrupt and called for the king to be subject to the rule of law.

They called for him to resign after 40 years in power.

Many waved Bahraini flags and chanted: “The people want the fall of the regime”.

The government’s decision to drop charges against Mr Mushaima is one of the concessions that it has offered the opposition in the hope of securing its participation in a process of national dialogue.

The question now is whether the government is willing to offer enough to heal the deepening rifts in Bahraini society, our correspondent says.

The protesters are calling for a genuinely democratic elected parliament. They agree that if any minister is to be sacked, it should be the prime minister, our correspondent says.

Bahrain – home to the US Navy’s Fifth Fleet – is the first Gulf country to be thrown into turmoil by the wave of unrest sweeping the Arab world.

On Friday, the Chairman of the US Joint Chiefs of Staff Admiral Mike Mullen visited Bahrain and described the country as a critical long-time ally.