Libyans in tears plea to U.N. Security & Human Rights Councils to ‘Save Libya’ 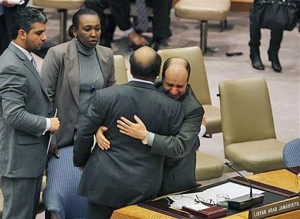 The Libyan ambassador to the United Nations made an impassioned appeal Friday to the U.N. Security Council, calling on the U.N.’s most powerful body to adopt a strong resolution and “save Libya.” His speech ended with him embracing his deputy, who had defected from Libyan leader Moammar Gadhafi’s camp earlier this week, and both men sobbing as the U.N. Secretary-General and other ambassadors came over to embrace them and shake their hands.

It was not immediately clear that Ambassador Abd al-rahman Shalgham was going to change his position and take the side of the Libyan people, but as his emotional speech to the council took shape, it became clear he no longer supported Gadhafi, a man he has called a friend since childhood.

Shalgham refuted Gadhafi’s claims that anti-government protesters are taking to the streets because they are on drugs, saying “a mountain” of pills would not have been enough for all the people who have taken to the streets of Benghazi. Through an interpreter, he addressed the council about Gadhafi.

“Today I listen to him telling his people either I rule over you or I kill you, I destroy you. Don’t be afraid, Libya is united, Libya will remain united. Libya will be a progressive state. But I tell my brother Gadhafi, leave the Libyans alone,” said Shalgham.

Meanwhile, a Libyan envoy to the United Nations, who asked not to be named, out of fear of reprisals, stood up in Geneva and told the Human Rights Council on Friday that he and others at the embassy ‘represent only the Libyan people’, making a dramatic public defection.

‘We in the Libyan mission have categorically decided to serve as representatives of the Libyan people and their free will,’ the diplomat said in an unexpected announcement punctuated by a minute’s silence for the ‘martyrs’ who died in the Libyan unrest.

‘We only represent the Libyan people, we will serve as their representative in this august body and in other international fora. Thank you,’ he added, to applause from the 47-member Human Rights Council.

The Libyan seat had remained empty through the morning of Friday’s debate as the council discussed a resolution condemning the deadly attacks on anti-regime protestors in Libya and seeking an international investigation.

But the diplomat appeared after a break at the beginning of the afternoon session and was immediately allowed to speak.

After the council held a minute’s silence at his request, he asked permission to stand and read verses of the Koran ‘in honour of the memory of the martyrs of 17 February’.

‘The young people in my country today, 100 years after the Italian fascist invasion of Libya, are today with their blood writing a new chapter in the history of struggle and resistance,’ the diplomat said in a statement to the UN body.

The envoy said: ‘Peoples remain while people pass away.’

‘The will of people is invincible as history has shown, the memory of peoples is stronger than those of the hatchet men.’