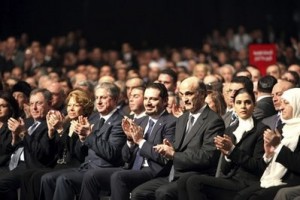 The 60 March 14 coalition MPs are preparing to hold a meeting at the Bristol Hotel on Sunday at 6:00 pm where they are expected to announce the camp’s final position on the participation in Prime Minister-designate Najib Miqati’s government.

Lebanon First bloc MP Okab Sakr said on Saturday that the March 14 coalition will become a democratic opposition “against a militarist regime.”

“We will be a democratic opposition that strips this militarist regime,” Sakr told New TV, in a reference to the armed Hezbollah group.

He also said that March 14 will not remain silent “on a rule that terrorizes the Lebanese people with the [use of] arms.”

Addressing Hezbollah, Sakr said, “Your arms are sacred in confronting Israel but they are unholy when they are used [against other Lebanese parties].”

The daily An Nahar reported on Saturday that the MPs’ statement will confirm the camp’s refusal to participate in Miqati’s government “because he failed to grant it guarantees it had requested, as well as the blocking minority.”

The MPs are also expected to condemn the way President Michel Suleiman and PM-designate Miqati are being treated by the March 8 camp.

Caretaker Prime Minister Saad Hariri is expected to hold an important speech after the meeting, but a date has not been set for it.

Meanwhile, a March 14 source told An Nahar that the camp did not sense any new position in Miqati’s recent statements in Tripoli, “but he repeated the same wooden statements on justice and the truth while the March 8 camp is preparing a ministerial statement devoid of any reference to the Special Tribunal for Lebanon and the arms possession outside the state.”