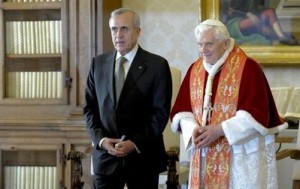 “I accept your free resignation, [and] I am sure that you will remain with the Maronite Church with your prayers,” the Pope told Sfeir in the letter.

The letter—which was sent to Sfeir’s residence at the Maronite School in Rome—thanked the Patriarch for his work, LBC television reported, adding that the Pope noted in the missive that Saturday is the 60th anniversary of Sfeir’s induction as a priest.

The Pope said in a letter to Sfeir: “I accept your free decision that reflects your humility.”

“I trust that you will always stand by the Maronite church in prayer, wisdom, and sacrifices,” it concluded.

In an interview with OTV in the Vatican on the sidelines of a ceremony to unveil the statue of Saint Maroun, Sfeir said: “They’re free to say what they want, but the real reason is that I have reached the age of 90.”

The patriarch noted that “the biggest threat facing the Lebanese is their split.” He added, however, that the Lebanese situation “is still better than the situation in neighboring countries.”