No retreat in Bahrain, as protesters march on 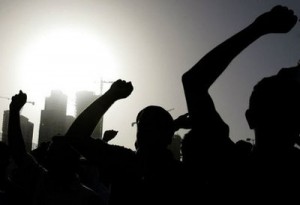 Bahrain protesters are showing no sign of retreating as an anti-government uprising enters its 11th day and opposition groups say the state has not yet met their pre-conditions for dialogue.

In a sign they had no intention of leaving Manama’s Pearl Square, demonstrators overnight on Wednesday renamed it “Martyrs’ Roundabout”, hoisting Bahrain’s red-and-white flag bearing the new name to honour the seven victims of deadly police raids on the protests.

“Whoever thinks they can liquidate our cause by suggesting dialogue is under illusion,” read a large banner hanging between two palm trees at the tent city in Pearl Square on Thursday.

Thousands of mainly Shi’ite protesters have daily poured into Pearl Square since February 14, many demanding the end of the Sunni Al-Khalifa dynasty, which has ruled Bahrain, a majority Shi’ite country, for over 200 years.

Official opposition groups have stopped short of voicing the same demands, calling instead for major reforms including the election of a prime minister and the creation of a “real” constitutional monarchy.

In a statement on Wednesday, the opposition coalition said a call for dialogue by Crown Prince Sheikh Salman bin Hamad al-Khalifa lacked “foundations”.

Dialogue should be “built on clear foundations”, the statement read, adding: “None of these foundations were mentioned in the crown prince’s invitation to dialogue.”

The opposition has demanded the resignation of the government headed by King Hamad’s uncle, Sheikh Khalifa bin Salman, as a pre-requisite for dialogue.

The INAA controls 18 seats in the 40-member parliament. The bloc has quit parliament in protest at the killing of the demonstrators.

In a bid to reach out to protesters, King Hamad this week ordered the release of several Shi’ite prisoners under royal pardon.

A number of those released, who had been on trial for terrorism and plotting to overthrow the regime, appeared at Pearl Square late on Wednesday.

Some of the released activists have claimed they were tortured in prison.

“They only dealt with us through electric shocks, beating and insults,” one of the pardoned activists, Sheikh Mohammed Habib al-Muqdad, told the local Al-Wasat daily.

One of those pardoned was the leader of the Haq movement, Hassan Mashaima, who was detained in Lebanon while travelling to Manama from Britain, a judicial official in Beirut said on Thursday.

Mashaima was arrested on Tuesday at Beirut airport based on a warrant issued by Interpol, the official told AFP, adding that Lebanese authorities were seeking legal documents proving he had been pardoned.

Initial reports said 25 activists on trial had been pardoned – 23 of whom had been in detention and were freed – but a government statement late on Wednesday put the number of released prisoners at 308.

The statement also said authorities would launch an investigation into the torture allegations.

“The government of Bahrain takes allegations of mistreatment extremely seriously and is committed to thoroughly investigate all and any claims made,” it read.

And while the majority of protesters continue to demand the toppling of the regime – echoing successful calls in Egypt and Tunisia – some are saying they do not necessarily want to see their king toppled.

“We do not demand the fall of the king, we want a government elected by the people,” said Qassem Zainedine, 26, a sports instructor who is camping at Pearl Square.

After a deadly police raid a week ago, security forces have been commanded not to use force with demonstrators.

Bahrain is a key ally of regional powerhouse Saudi Arabia and the US, which bases its Fifth Fleet in the kingdom.