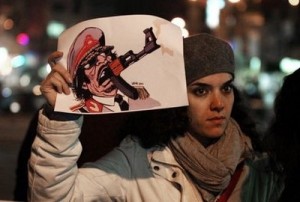 The UN security council has called for an immediate end to the violence in Libya and demanded that Muammar Gaddafi lives up to his responsibilities to protect his own people.

The Obama administration on Tuesday reiterated its condemnation of bloody clashes between protesters and those loyal to the Libyan leader, Col. Muammar el-Qaddafi, but it stopped short of threatening concrete measures, like sanctions or a no-flight zone above Tripoli.

A few hours after the Libyan dictator issued his defiance of the international community, the security council hit back with a unanimous statement from the 15 members of the security council that condemned the violence and deplored the repression of peaceful demonstrators.

The statement called for the immediate lifting of restrictions on all forms of the media and for the safety of foreign nationals to be ensured.

Secretary of State Hillary Rodham Clinton said the Libyan government was responsible for the bloodshed, which she called “completely unacceptable.” But with the United States not yet able to get its diplomats out of the country, she said, “the safety and well being of Americans has to be our highest priority.”

Mrs. Clinton said the United Nations Security Council was the proper place for further action against Libya, adding that the situation on the ground was still too murky to make a judgment. “As we gain a greater understanding of what is actually happening,” she said, “we will take appropriate steps in line with our values, our principles and our laws.” She noted that communications were largely shut down.

Libya’s deputy ambassador to the UN, Ibrahim al-Dabashi, who has joined a number of Libyan diplomats who have defected from the Gaddafi regime, said the UN’s position did not go far enough. “It is not strong enough, but any message to the Libyan government at this stage is good.”

Dabashi said that he had received reports that “genocide” had begun in the west of the country, with ground attacks occurring from Libyan forces working alongside “mercenaries from many African countries”.

The US and British governments welcomed the security council statement. Mark Lyall Grant, the UK ambassador to the UN, said its strength came in its contents “and the fact that it is a united message”.

The US mission to the UN said it provided a “clear and unified voice that the violence must end immediately”.

The statement has no instant teeth – it will lead to no action on the part of the international community. That would require the forging of a resolution that would take days, if not weeks, to accomplish.

Its issuing was preceded by hours of confusion over the Libyan representation at the UN. In farcical scenes, the Libyan ambassador to the UN, Abdurrahman Mohamed Shalgham who still supports Gaddafi, and deputy Dabashi, both claimed to be speaking for their nation.

In the end Shalgham addressed the security council, telling the five permanent members – the US, Britain, France, Russia and China – and 10 non-permanent members that the Libyan public prosecutor had begun to investigate the killings in the unrest so far. The ambassador denied that there had been any aerial bombardments of demonstrators, though he did concede that the eastern side of the country had fallen and was no longer in government control.

Shalgham’s appearance surprised observers as he had been absent for several days.

He said he had been holding discussions with senior members of the government, including the foreign minister, trying to persuade them to stop the bloodshed. “I am still trying to speak to the leader [Gaddafi]. We have to stop attacking Libyans,” Shalgham said.

Asked who was to blame, he answered: “All the regime is responsible. I am one of them – we are all responsible.”