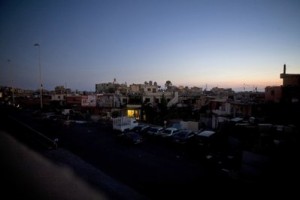 Jordanian authorities have suspended power supply to Lebanon due to the disruption of regional gas pipelines, according to a statement issued Tuesday by Lebanon’s state-run power company, Electricity du Liban.

The shutdown, which is likely to worsen existing power shortages in Lebanon, comes as a result of the destruction of natural gas lines from Egypt which had helped fuel Jordan’s electricity production. As a result of the destruction, which came during political turmoil in Egypt earlier this month, Jordan has been forced to reduce its electricity exports to both Syria and Lebanon, EDL said.

The shutdown of Jordanian supply to Lebanon began Sunday and could last approximately two weeks until the lines from Egypt to Jordan are repaired, according to EDL’s statement. The disruption has already produced “a negative impact” on local power supply in Lebanon, EDL added, without specifying the scale of the impact on Lebanese consumers.

Lebanon received at least 100 Megwatts of power from Jordan before the disruption, according to Chafic Abisaid, a former director of studies at EDL. He estimated that the shutdown could result in an 8 percent loss of overall power production in Lebanon. EDL said the loss would not affect Beirut, but is likely to put additional pressure on consumers outside the capital with some areas already reporting up to 12 hour outages per day.