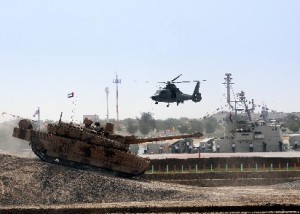 Amid a bloodbath in Libya and the Arab world in turmoil amid much Western hand wringing about selling weapons to dictatorial Arab regimes, the world’s arms dealers are touting their wares at the Middle East’s biggest defense exhibition in Abu Dhabi.

The biannual show produced $5 billion in contracts by the Emirates alone in 2009.

But the global defense industry faces the prospect of a sharp downturn in the lucrative Middle East arms market, in the short term at least, if the unrest brings down more regimes after the ouster of the Egyptian and Tunisian presidents in recent weeks.

The regimes that emerge from the chaos, which is also engulfing Libya, Jordan, Yemen, Oman and Morocco could be hostile to U.S. policies that did so much to keep Arab dictators in power.

The fury of the Iranians against the United States after its ally, the shah, who owed his monarchy to the machinations of the CIA, was toppled in 1979 is an example. U.S.-made weapons were used to kill thousands of unarmed protesters, not all of them Islamist zealots, before the Peacock Throne was overthrown.

Similar reactions have been seen in Tunisia and Egypt whose militaries are armed and trained by the United States.

In Abu Dhabi, the upheaval appeared to be getting a little too close for comfort.

As the five-day expo got under way in the United Arab Emirates, further north in the island kingdom of Bahrain, security forces, many of them mercenaries, were firing on protesters demanding democratic reforms and the fall of the ruling Khalifa dynasty.

The uprising in Bahrain, a major financial hub in the region, is the first to erupt in the oil-rich gulf states whose appetite for Western weapons systems seems insatiable.

These six states — Saudi Arabia, the United Arab Emirates, Kuwait, Oman, Qatar and Bahrain — could probably keep the defense industries of the United States, Britain and France in business all by themselves.

These states, led by Saudi Arabia and the Emirates, have embarked on one of the largest military upgrade programs in peacetime history and have ordered U.S. weapons worth some $123 billion over the next few years, primarily to counter Iran’s military power.

In recent days, Britain and Germany have revoked a cluster of licenses to sell arms to Bahrain and Libya. But, as the liberal Guardian newspaper of London reported, it was business as usual at IDEX.

“The show of arms was choreographed for the benefit of thousands of arms dealers in dark suits and sunglasses, who marveled at how it was all synchronized to a booming hip-hop soundtrack,” correspondent Robert Booth observed.

“Inside the exhibition hall, brimming with weapons — from Predator drones to the latest digital camouflaged assault rifle — few could ignore the real violence happening in Libya and Bahrain.”

Television footage of violent clashes in the streets of Cairo before Egyptian President Hosni Mubarak stepped down showed several of the army’s 1,000 M1A1 tanks built in Egypt under license from General Dynamics Land Systems, while Lockheed Martin F-16s streaked overhead triggered criticism of Western arms sales to such regimes.

But these arms sales, worth billions of dollars to U.S. defense contractors every year at a time when the U.S. defense budget is being slashed, are a key element of U.S. policy in the Middle East.

“U.S. foreign arms sales are a major force for stability, security and even at times democratization around the world,” Daniel Goure of the Lexington Institute’s Early Warning Blog, maintained in a Feb.1 assessment.

“Foreign military sales provide a wealth of benefits for the United States and the recipient countries. The role of such sales in supporting regional security is obvious.

“Because it controls the flow of spare parts and the technology to upgrade U.S. systems, Washington can also influence local politics,” Goure observed.

“In World War II, the United States earned the title of the Arsenal of Democracy. Since that time the continued use of the title has been justified by the way the United States has employed targeted arms sales to support and influence friends and allies around the world.”