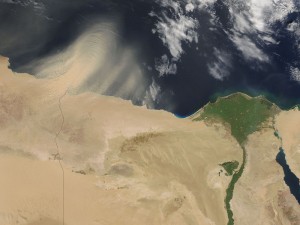 Al Jazeera’s signal across the Middle East and North Africa was plagued by jamming on Sunday, the Arab satellite broadcaster said, and Lebanon said the electronic interference was coming from Libya.

Al Jazeera, whose coverage of the regional political unrest has been widely watched in the Arab world, first reported jamming on Friday and said its website had been blocked in Libya.

“They (Libyans) see what these televisions carry about what is happening in their country and they jam the transmission points … so Al Jazeera is affected and we are affected too,” Nahhas told Reuters.

Officials says Libya is jamming some Lebanese TV stations because of their reporting on the bloody crackdown on protesters in the North African country.

“We believe that whoever is doing this is operating with sophisticated and large equipment,” an Al Jazeera spokesman said in a statement.

The crackdown in Libya is shaping up to be the most brutal repression of anti-government protests that began with uprisings in Tunisia and Egypt.

The two nations have troubled relations going back to the disappearance of a Lebanese Shiite cleric 30 years ago on a visit to Libya. In Lebanon, it is widely believed the cleric was killed after a dispute with Moammar Gadhafi.