F1 season opening Bahrain GP may be scrapped over protests 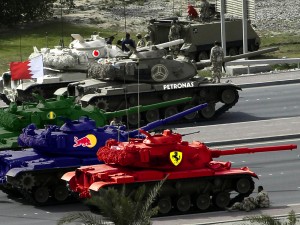 Formula One’s season-opening grand prix in Bahrain could be in jeopardy as newly emboldened protesters in Manama call for the royal family to scrap what they see as a costly vanity project, though the race also is the Gulf island’s premier international event.

Demonstrations shaking the Arab world have put F1 smack in the middle of a power struggle in the small kingdom and U.S. ally, and those trying to oust the island’s dynasty know they have an important political tool in the Bahrain GP.

The race, which has been held since 2004, is meaningful to Crown Prince Sheik Salman bin Hamad Al Khalifa. Having it called off would be embarrassing for the country and painful to him.

“There is a big connection between [the uprising] and Formula 1,” said Hasan Dhani, a 23-year-old protester.

After days of seesaw battles in which seven demonstrators were killed and hundreds wounded in battles around a landmark in Manama, government forces retreated Saturday and allowed protesters to reoccupy Pearl Square — giving demonstrators a victory, at least temporarily.

The streets were calmer Sunday as hundreds of marchers prepared to spend a second consecutive night in the square, with some planning to stay longer. The protest encampment included a makeshift clinic and a barber. Food donations were being collected in the center of the square. As night fell, protesters carried blankets to their tents and men gathered in open-air “cafes,” sitting in arm chairs and smoking water pipes.

The drama turned to political haggling over demands for the monarchy to give up its near-absolute control over key policies and positions, with the March 13 race playing into the equation. Opposition leaders from the nation’s Shiite Muslim majority — in a nation ruled by Sunni monarchs — seemed in no hurry to sit down and negotiate or make promises not to disrupt the grand prix.

“The race has been the prince’s dream since he was a child,” Dhani said. “He wants to negotiate so he can fulfill this dream, and it makes me sad that his dream is more dear to him than the needs of his people.”

F1 boss Bernie Ecclestone said Sunday he would rely on the prince, who also is deputy supreme commander of the armed forces, to decide whether the grand prix will take place.

“If anyone’s going to sort it out he’s the right guy to do it,” Ecclestone told BBC radio on Sunday. “He would decide whether or not it’s safe for us to be there. … Let’s wait until Tuesday and see if this one’s going to take place before we decide what to do.”

The protesters are adamant that the race — if it proceeds next month — would be an insult to the victims of the uprising and proof that the Sunni royal family, in power for 200 years, has not heard the demands of the Shiite population, which wants a larger share in the nation’s decision-making process.

“His precious Formula One is more important than the blood of his people which he spilled,” said Mohammed Nimah, 38-year-old protester.

The event brings worldwide attention to Bahrain thanks to F1’s enormous popularity, but it costs millions of dollars to put on in a country with a big gap between rich and poor, and Nimah said he thinks the crown prince — who owns the F1 contract — only offered talk to the opposition after the popular uprising cast doubt on the race.

“We put pressure on the Formula One contract, the crown prince got scared and now he wants to negotiate,” Nimah said.

The Foreign Office in Britain, where Ecclestone and several F1 teams are based, has warned against nonessential travel to Bahrain.

Ecclestone said the race could be moved to later in the season, but said it’s not feasible to move the race to another circuit on short notice.

“Well they’re probably not ready, just to pop these things on just like that,” Ecclestone said. “Let’s hope it will be all right as it’s already scheduled.”

Bahrain’s opposition leaders are still mindful about the government’s sudden decision, under international pressure, to move from a crackdown to asking for negotiations.

“Yesterday you kill people and today you want them to sit with you. It’s not that easy,” said a leader of the main Shiite opposition group, Abdul-Jalil Khalil, adding no talks have yet taken place.

The protesters feel they have time. Dhani said he and others are staying in Pearl Square until their demands for change are met.

“The F1 is a big festival for us, too, and I love it,” Dhani said. “But our demands are worth sacrificing the race for.”