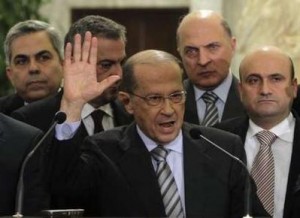 President Michel Suleiman and Free Patriotic Movement leader Michel Aoun remain at odds on Sunday over the interior ministry portfolio and the Aoun’s insistence to name most of the Christian ministers. Other March 8 parties reportedly also oppose Aoun’s demand.

Prime Minister-designate Najib Mikati was appointed to the premiership on January 25 with the Hezbollah-led March 8 coalition’s backing and has called on all parties to join his cabinet, however there are dim hopes of forming a cabinet soon amid the bickering between Suleiman and Aoun.

Pan-Arab daily al-Hayat quoted Suleiman as saying that he is holding onto the interior ministry and his representation in the government. Suleiman has vowed not to sign a cabinet decree that “does not respect coexistence and harmony in representation.”

An Nahar said that Speaker Nabih Berri and Mikati contacted Aoun to wish him a happy birthday on Saturday. Berri reportedly asked Aoun about rumors that he would get the foreign instead of the interior ministry and in return the speaker would get the defense portfolio.

The speaker stressed to the FPM leader that the foreign portfolio will remain as part of his share in the new cabinet, the newspaper said ,hinting that Berri is also holding onto the foreign ministry and further complicating the task of Miqati to resolve the interior portfolio’s problem.