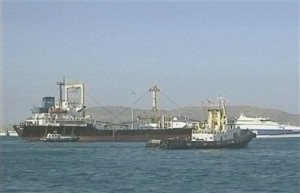 A ship sent by a Libyan charity to break Israel’s naval blockade of the Gaza Strip changed course in the Mediterranean Sea on Wednesday and instead appeared headed for an Egyptian port, signaling that it would avoid a showdown with the Israeli navy.

Israel’s military said the vessel was now steaming away from Gaza and toward the port city of el-Arish, and Egypt’s state news agency MENA reported that Egyptian authorities were “making preparations” to receive the boat there.

The ship, the Moldovan-flagged Almathea, was still crawling in international waters by mid-afternoon Wednesday and could not be contacted for confirmation. An Al-Jazeera reporter on board the aid ship said Israeli vessels were arrayed in a “wall” meant to prevent the ship from continuing toward Gaza.

In recent days, with the vessel’s organizers insisting it would go to Hamas-ruled Gaza and Israel saying it would not allow that to happen, the stage appeared set for a showdown on the high seas. Framing the faceoff was Israel’s botched attempt to block a similar Gaza-bound aid ship in May, an incident that ended with the deaths of nine Turkish activists in a violent confrontation on board.

In Gaza, the head of the territory’s Hamas government called on the Libyan ship to press ahead to its original destination. Speaking at a ceremony naming a street after the nine pro-Palestinian activists killed May 31, Ismail Haniyeh called the Libyan ship “our moving hope in the Mediterranean Sea.”

“Beware not to fall into the trap and stop in a port other than Gaza,” he said.

Conflicting messages on Tuesday created confusion over whether the Amalthea intended to try to run the blockade or not.

Israeli military officials said the ship’s captain informed Israel he was heading for the Egyptian port, but the port’s chief, Gamal Abdel Maqsoud, said there had been no communication so far with the ship. A spokesman for the Libyan mission insisted the ship still intended to try to reach the Palestinian territory, but said those aboard would not violently resist any efforts to stop them.

“First and foremost, we want to arrive in Gaza. If this is impossible, we don’t want to subject anyone to danger,” Youssef Sawani, an official with the Gadhafi International Charity and Development Foundation who was in contact with the boat, told the pan-Arab Al-Jazeera TV.

The Gadhafi foundation, headed by the son of Libyan leader Moammar Gadhafi, said the Amalthea left Greece on Saturday carrying 2,000 tons of food and medical supplies. Israel invited the activists to sail to the Israeli port of Ashdod and unload the supplies there, after which Israel would screen the goods and send them into Gaza overland. The group refused.

The deaths of the nine pro-Palestinian activists in the May 31 raid focused international attention on Israel’s blockade of Gaza, imposed after the Islamic militant and anti-Israel Hamas violently overran the Palestinian territory in June 2007. The international criticism forced Israel to ease its land blockade of the territory but it has maintained the naval embargo, insisting it is vital to keep weapons out of Hamas’ hands.

Restrictions remain on materials like cement and steel that Israel says could be used for military purposes, and Gaza’s 1.5 million people, confined to the small, impoverished territory, have been plagued by other problems, including a chronic cash shortage.

George Saba, who manages a branch of the Cairo Amman Bank in the territory, said Wednesday that because of cash shortages the bank could not pay this month’s salary to government officials. Palestinian officials in the West Bank were trying to arrange a transfer of Israeli cash into Gaza to alleviate the shortage.

Also Wednesday, a Gaza health official said a 42-year-old Palestinian woman was killed and four other Gazans were wounded late Tuesday by an Israeli tank shell. The military said it opened fire after spotting people near the security fence and suspected they might be planting explosive devices.

A Gaza rights group, the Palestinian Center for Human Rights, issued a statement Wednesday condemning unknown Palestinian assailants for throwing a grenade at the campus of Gaza’s YMCA, run by local Christians. No one was injured in the attack, which the group said took place early Tuesday.

Members of extremist Islamic groups in Gaza have been suspected in past attacks on internet cafes and Christian institutions. AP