Israel has no plan to comply with U.N. call for nuclear-free ME

Israel has no plan to review its nuclear policies, a government official said on Friday, playing down efforts by world powers at a U.N. non-proliferation conference to promote a Middle East free of atomic arms.

Hoping to win Arab backing for sanctions against Iran, the United States and other permanent U.N. Security Council members on Wednesday called for ways to be found to implement a 1995 initiative that would guarantee nuclear disarmament in a region where Israel is widely assumed to have the only such weapons.

The declaration followed campaigning by Egypt to focus attention, during this month’s nuclear Non-Proliferation Treaty (NPT) conference, on non-signatory Israel, which has set peace with all its neighbors as a precondition for joining the pact.

“There is nothing new here, and no reason for a change of direction on our part,” a senior Israeli official told Reuters.

Egypt, which heads a powerful bloc of non-aligned developing nations, has circulated a proposal to the NPT’s 189 signatories calling for a conference by next year on ridding the Middle East of nuclear weapons, with all regional countries taking part.

The United States and Russia, with the support of Britain, France and China, have been negotiating with Egypt to come up with an acceptable compromise proposal, Western diplomats say.

U.S. Undersecretary of State Ellen Tauscher told an audience of delegates and reporters on Wednesday it was hard to imagine negotiating “any kind of free zone in the absence of a comprehensive peace plan that is running on a parallel track.”

Egypt was the first Arab state to make peace with Israel, in 1979, but few have followed suit. Iran, an NPT signatory whose uranium enrichment has stirred Western fears of an illicit bomb project — despite Tehran’s denials — spurns the Jewish state.

The Obama administration’s outreach to Iran has prompted some analysts to predict the United States will reassess its 40-year-old “don’t ask, don’t tell” policy toward an Israeli arsenal that is believed to include some 200 atomic warheads — a grievance and perceived threat among many Arabs and Muslims.

But the Israeli official said the administration’s attitude on this matter was so far “identical” to the line taken by its predecessors.

Israel neither confirms nor denies having nuclear weapons under an “ambiguity” strategy billed as warding off enemies while avoiding public provocations that can trigger arms races.

Those safeguarding the official reticence have frowned upon the very fact that Israel is being discussed at the NPT forum.

“We don’t really like this matter, but is there anything to fear, really? I don’t think so,” Israel Michaeli of the Israel Atomic Energy Commission said in a radio interview on Monday, as the month-long conference opened in New York.

“Our complaint is that people make this comparison between Iran and Israel, when there is absolutely nothing to connect the two,” he told Israel’s Army Radio.

“Israel did not join the pact, did not undertake its obligations. To a degree it paid a price for this, but it has certainly never cheated or defrauded anyone.”

The 1970 NPT expedites member-states’ access to nuclear energy in exchange for their forswearing of nuclear weaponry. 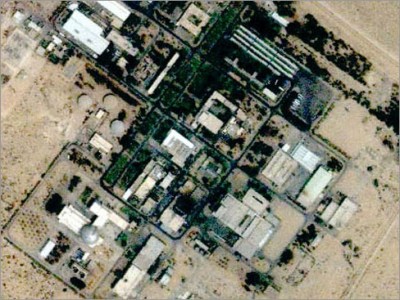 The existence of Israel’s nuclear program is officially denied by the Israeli government . This is the image of the Israeli nuclear reactor at Dimona . The reactor is reportedly in the lower left of this image.