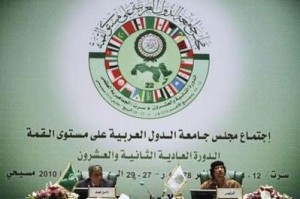 Arab leaders are about to release a statement detailing a strategy to tackle Israel’s illegal occupation of East Jerusalem, on the final day of a regional summit in Libya.

The leaders met behind closed doors in the northern city of Sirte on Sunday for the final session of the two-day Arab League Summit to work out a united strategy against Israel’s settlement policy.

Saeb Erekat, the Palestinian chief negotiator, said he hoped the final statement would be a strong one.

But he said Arab leaders were also reassessing their options regarding the Middle East peace process.

“The Arabs … have offered to accept the two-state solution, have offered to have peace as a strategic option, and what did the Israeli respective governments do all the time: more settlements, more fait accompli policies, more dictations, more facts on the ground.”

“We have to study the possibility that the peace process will be a complete failure,” he said in his opening speech.

“It’s time to face Israel … We have accepted an open-ended peace process but that resulted in a loss of time and we did not achieve anything and allowed Israel to practice its policy for 20 years.”

Jerusalem, which the Palestinians want as a joint capital for a future state, has been a particular point of focus for delegates.

Ban Ki-moon, the UN secretary-general, reiterated that Israel’s settlements were illegal under international law, and called for Jerusalem to be part of peace negotiations.

“Jerusalem’s significance to all must be respected, and it should emerge from negotiations as the capital of two states,” he said at the meeting’s opening session.

Ban also called for Arab leaders to support US-led efforts to facilitate indirect “proximity” talks between Israel and the Palestinians.

The Palestinians pulled out of the talks in reaction to Israel’s announcement it would build 1,600 settlements on occupied land.

But Mahmoud Abbas, the Palestinian president, has ruled out taking part in the talks unless Israel stops building settlements.

“We cannot resume indirect negotiations as long as Israel maintains its settlement policy and the status quo,” he said.

Danny Ayalon, Israel’s deputy foreign minister, called the declarations coming out of the summit “aggressive”, saying that the arguments put forward were based on “very selective opinions”.

“We say strongly and firmly that we have a legal right to build in Jerusalem and those that seek to enshrine the 1949 Armistice Lines, the so-called Green Line, as a border, have not understood history nor legal precedence,” he said.

“We call on the Palestinian Authority to cease living in delusions of forcing Israel to the pre-1967 lines and to come and join us at the negotiation table without preconditions.”

Many Arab leaders have been angered by the opening of a restored 17th century synagogue near the al-Aqsa mosque compound in Jerusalem, home to Islam’s third holiest site.

They see such acts as a clear intention by Israel to “Judaise” Jerusalem and undermine chances for a peace agreement with the Palestinians who consider East Jerusalem the capital of their future state.

Arab leaders were expected to ratify an agreement drafted by their foreign ministers to raise $500m in aid to improve the living conditions for Palestinians in Jerusalem as part of a “rescue” plan for the city.

The leaders were also due to discuss a number of strategies, including keeping a record of what they consider to be Israeli “violations” in Jerusalem to refer them to higher bodies such as the International Criminal Court, based in the Hague in the Netherlands.