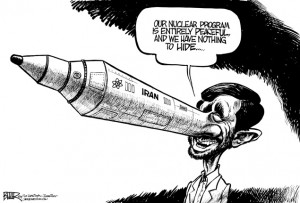 Iranian plans to build a nuclear reactor have caused tensions for its neighbor and longtime enemy, Israel.

Iran claims that its intentions are to build a reactor to harvest cheap and efficient electrical power. The Untied States and its western allies suspect Iran might be using this as a ruse to build a nuclear weapon.

Discussions are under way to impose new economic sanctions against Iran if it does not comply with inspections of its facilities, furthermore being forthright with its plans.

The reactor construction plans are being built and fueled by the Russians. Prime Minister Vladimir Putin announced that the Russian-built reactor would begin to generate electricity in Iran as early as this summer. Putin, who views nuclear power as an industry that would again make Russia a super power, is eager to start other ventures around the globe.

These announcements and America’s failure to curb the production of the reactor, has caused a stir in Israel, which sees Iran as its number one enemy among many in the Middle East. Israel has made no secret that it would attack Iran if plans were to be completed.

It would not be the first time Israel has done so.

The problem that exists and makes this situation unique and somewhat complicated, however, is that Iran to Shiites is considered the land where their supreme leader exists and their allegiance lies to him.

The cleric is viewed as the highest ranking political and religious authority in Iran, more powerful than the president of Iran. Shiite-based countries such as Syria, Lebanon and Iraq would see it as a threat to their religious base if Iran were to be attacked by Israel.

Iran, who provides these countries logistically with arms and cash, undeniably expects their backing if there were to be a conflict.

These stalemates bring an air of fear, paranoia and distrust in the region, with both sides making accusations that only enflame the situation and make it worse.

The United States is caught in the middle by trying to ease tensions between Israel and Iran, yet trying to inveigle China and Russia to end their support for Tehran. Unsuccessfully, the U.S. is caught between many embittered nations. Amid a war on two fronts, its attention cannot solely be focused on this issue.

Nuclear power is a source of energy that was first harnessed by the United States, but since has been used by many countries for fuel and weaponry. It has become a clean and cheap alternative form of fuel. As countries such as Iran start to develop nuclear power, they will look toward such alternatives to improve themselves.

The day has come and gone when our hegemony alone would have been enough to quell this standoff. Today, China, North Korea and Russia are all players in the nuclear arms race. The players have not changed all that much, there just seems to be a lot more of them. The Klaxon