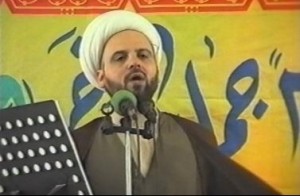 A senior Shiite religious figure has called for scrapping Lebanon’s decades-old power sharing system, part of the Taif Agreement, in a speech during Eid Al-Fitr, which marks the end of the holy fasting month of Ramadan.

The speech, by Grand Jaafarite Shiite Mufti Sheikh Ahmad Qabalan, has ignited divisions among Lebanese over what is the best form of governance to prevent the country sliding into sectarian conflict.

Lebanon has been characterised by conflict between the 18 officially recognised religious groups within its borders since independence from France in 1943 and endured a 15-year civil war between 1975-1990 along sectarian divisions.

The 1989 Taif Agreement ended the civil war and stipulated equal power sharing between Muslims and Christians in an effort to quell political instability.

In the televised speech, however, Qabalan said: “No to the Taif [Accord], no to a farm of sects, no to a state of quotas, no to a system of sharing spoils, no to a state that starves citizens, and no to sectarian federations. Yes, to a state of the law and yes to the state as a strong and just institution.”

Adding, “the origin of Lebanon’s founding was done on a sectarian and tyrannical basis with the aim of serving the imperialist and monopolist project. This formula is finished… [it] is no longer valid for a state [that befits] a human being, a citizen.”

Qabalan’s speech appears to respond to calls made by some Christian politicians for a federal system and echoes a key demand of hundreds of thousands of Lebanese who took to the streets on 17 October in an unprecedented cross-sectarian anti-government uprising.

The call, nevertheless, has faced staunch opposition from the country’s politicians and government.

Apparently responding to the speech, Information Minister Manal Abdel-Samad said: “The government is committed to the Taif [Accord] and we are proceeding on this line.”

While the Future Movement’s parliamentary bloc, which boasts former Prime Minister Saad Hariri, rejected Qabalan’s call and warned the country’s fragile coexistence could be destroyed without the Taif Agreement.

“While confirming its categorical rejection of these proposals, the bloc warns of the risks [posed by] any call for overturning the Taif Accord and the Lebanese formula,” the Future Movement bloc said in a statement.

Meanwhile, Lebanese Forces leader Samir Geagea termed messing with the Taif Agreement “suicide” and warned the move would “have grave consequences as no one knows where the situation might go”.

Lebanon’s top Shia political and religious leaders, including Hezbollah, however, have so far avoided public comment on the matter.

Lebanese politicians have frequently called for a new ruling formula or changes to the Taif Agreement in light of geopolitical developments in the region.

This is not the first time Qabalan speaks against political sectarianism

In 2010 he warned that the era of political domination by the Maronites, the Sunnis or Shiites in Lebanon is over.

“We refuse to go back to that era …return to Maronite politics to Lebanon,” Qabalan said. “We also don’t want a return of Shiite politics or Sunni politics because it is through partnership that political decisions are made in Lebanon.”

Turning to the late Maronite Patriarch Nasrallah Sfeir, Qabalan asked: “Is there a need for concern and fear of partners and brethren in the homeland?

“Are calls for a strong and just state that serves the needs of its citizens considered fanatic? Is it a national demand or is there something hidden and dangerous?” he added.

“We won’t allow anyone to be suspicious of our patriotism,” Qabalan threatened.

“You have to be convinced that Lebanon is for all its citizens, and the State should act on this basis,” he said in a clear reference to Maronites.

“We shall hold on to these weapons,” he stressed and added the “resistance is our honor and our dignity and its weapons are our glory.”

According to analysts , politicians in Lebanon my not like the Taif Accord but they hate Hezbollah’s arms because the Iranian backed militant group uses its weapons to dominate Lebanon and its politics . In other words politicians feel that both Hezbollah arms and Taif should both be dumped