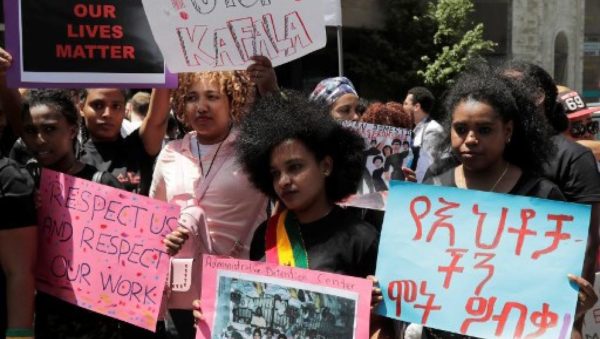 FILE PHOTO: Foreign workers demonstrate in Beirut, May 5, 2019 (illustration image). ANWAR AMRO / AFP. The collapse of the Lebanese economy hit hard the migrant workers in Lebanon . They are usually paid in US dollar , but the banks stopped dispensing any foreign currency
Share:

Lebanon’s unprecedented foreign currency crisis means that many migrants have not been paid for months or that the value of salaries is down by more than half. Others have lost their jobs after employers dumped them on the streets or outside their embassies.https://3a82bf4c0e20a72ef84183b09e6eb6a4.safeframe.googlesyndication.com/safeframe/1-0-37/html/container.html

“We are invisible,” said Banchi Yimer, an Ethiopian former domestic worker who founded a group that campaigns for domestic workers’ rights in Lebanon. “We don’t even exist for our governments, not just the Lebanese government.”

In just three days, she said, 20 Ethiopian domestic workers were abandoned by their sponsors and left outside the embassy. A photo she posted shows women with as little as a backpack or a purse, lined up along the walls of the embassy — some sitting on the floor.

The pandemic delivered just the latest blow to a Lebanese economy, already devastated by a financial crisis brought on by decades of corruption and mismanagement. In recent weeks, the Lebanese pound, pegged to the dollar for more than two decades, has lost 60% of its value against the dollar and prices of basic goods soared. Unemployment has risen to 35% and an estimated 45% of the country’s population is now below the poverty line.

In this crisis, migrant workers are among the most vulnerable.

Among them are 180,000 domestic workers, most of them women and many from Ethiopia and the Philippines. Thousands live illegally, after escaping their employers to whom they were tied under an ill-reputed sponsorship system, known in Arabic as ‘kafala,’ which dates back to the 1960s.

Many are trapped, unable to go home, because they cannot afford the exorbitant costs of repatriation flights or because global air travel is severely restricted.

Their plight is similar to that of migrant workers in other countries, including foreign laborers in oil-rich Gulf Arab states who now find themselves jobless, as COVID-19 stalks their labor camps.

In the Lebanese capital of Beirut, the financial chaos has added to their despair.

On Saturday, a Filipina domestic worker took her own life a day after arriving at a shelter run by the Philippines Embassy for workers waiting to return home after losing their jobs. In a statement Monday, the embassy said she died after jumping from a room she was sharing with two others.

Both the Philippines Embassy and Lebanese authorities said they were investigating the death.

Suspected suicides or escape attempts of foreign household workers have become a frequent occurrence in Lebanon, with local reports recording at least one incident a month.

Such desperate acts are often blamed on the sponsorship system, which rights groups say creates near slave-like conditions. Some employers do not allow their helpers to go out on the street alone or have a day off.

Domestic workers are not protected by labor law and are often shackled in a 24-7 work schedule with no right to resign.

“Some of their employers abuse them mentally physically and there is no law to protect them. Their employers … treat them like slaves,” said Tsigereda Brihanu, an Ethiopian activist with Egna Legna, Yimer’s organization.

A 2016 International Labor Organization study found that out of 1,200 employers surveyed, more than 94% withheld their workers’ passports.

Last week, security forces violently quelled a protest by Bangladeshi sanitation workers who were demanding an adjustment of their salaries to new market rates.

The pandemic has also taken its toll. A few dozen foreign workers living in overcrowded apartments in Beirut have tested positive for the coronavirus. Riot police are often deployed outside their buildings to enforce isolation.https://3a82bf4c0e20a72ef84183b09e6eb6a4.safeframe.googlesyndication.com/safeframe/1-0-37/html/container.html

“We don’t have the power to bring a plane and to take out everybody from this country. I wish we can do that,” Brihanu said. “Regular life in Lebanon is very difficult even to survive. It is not worth it to stay here.”

One Ethiopian worker said that even though her sponsor still pays her salary, she is already checking into going home because she knows the dollars will run out and prices will continue to increase. “Lebanon’s finished,” she said, declining to give her name in order to speak freely.

The virus lockdown has exacerbated work conditions. Some workers are not able to communicate with their own families and friends, the hours are much longer and the demands by employers are unrealistic, said Zeina Mezher of the International Labor Organization.

“They say that we are all in the storm, but it doesn’t affect us all in the same way,” she said.

Yimer, who founded Egna Legna in 2017, is now in Canada, where the group is registered as a non-profit organization, because it is illegal for domestic workers to be activists in Lebanon, and the government has refused to register a union for them.

Egna Legna, meaning “from us migrants to us migrants” in Amharic, Ethiopia’s official language, now offers food packages for some who lost their jobs and helps others pay rent.

“I have not worked for nearly three months,” said Kumari, a household worker from Sri Lanka.

Kumari used to hold down work in several homes in order to send money to her 5-year-old daughter who is being raised by her mother back home.

“Nobody has work. I want to go home but I can’t until corona finishes,” she said.