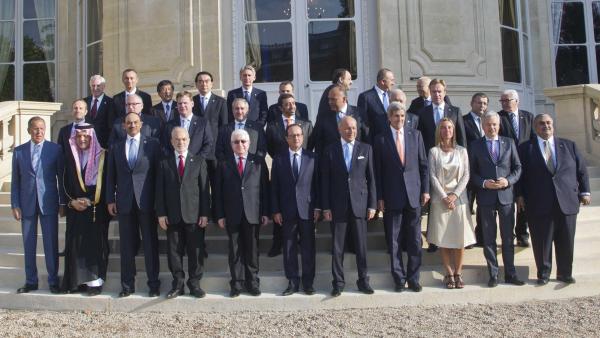 A conference to discuss how to combat the Islamic State is under way in Paris. Made up of 26 countries, including the U.S., Saudi Arabia and Russia, it aims to show a united front on fighting the militant group.
Share:

U.S. efforts to build a broad coalition to combat Islamic State on Monday ran straight into the sectarian chasm that has divided the Middle East for centuries, with Arab allies disagreeing over whether Iraq’s neighbors—particularly Iran and Syria—should have a role in any military campaign.

A group of 26 countries gathering in Paris—including the U.S., Saudi Arabia and Russia—vowed to back the fight against the Sunni extremist organization “by any means necessary, including appropriate military assistance.”

But a day after the U.S. said Arab states were willing to participate in airstrikes, Arab countries attending the Paris meeting gave no sign they were ready to join the military campaign. The U.S. also faced criticism from Russia, Syria’s top international ally, which insisted airstrikes on Syria must be coordinated with Damascus and Tehran.

After the international meeting concluded, the U.S. military said Monday night it made its first airstrike in Iraq targeting Islamic militants as part of the expanded mission announced last week. The airstrike hit a single fighting position set up by Islamic State militants that was firing on Iraqi security forces southwest of Baghdad, officials said.

Previously, the military was limited to strikes designed to assist with humanitarian missions, such as driving militants from Sinjar, to defend Iraqi infrastructure, or to protect U.S. personnel and facilities.

The hesitancy of many of the Middle East’s major Sunni leaders, including in Saudi Arabia, Jordan and the United Arab Emirates, to back military operations is driven, in part, by a belief American airstrikes against the Islamic State will benefit the region’s three main Shiite-dominated governments in Iran, Iraq and Syria, according to U.S. and Arab officials involved in the deliberations.

That debate highlighted how the Obama administration’s plans to lead the international coalition against Islamic State have plunged it more deeply into a regional feud between Sunni and Shiite states.

Sensitive to Sunni Arab states’ concerns, Secretary of State John Kerry and other U.S. officials have publicly ruled out in recent days cooperating militarily with Tehran and Damascus in rooting out Islamic State, though Washington acknowledged private discussions have been held with Iran’s rulers.
Such a stance raises the possibility that Iran’s Islamist rulers and Syrian President Bashar al-Assad’s regime could attempt to sabotage U.S. military operations, as they did in Iraq in the years following the George W. Bush administration’s overthrow of Saddam Hussein in 2003.

In recent days, leaders of Iraqi Shiite militias close to Tehran, including Kata’b Hezbollah and the Mahdi Army, have publicly warned Washington that U.S. soldiers could be targeted if the White House pushes ahead with its military offensive against Islamic State, also known as ISIS or ISIL.

“If you come back, we will be back too,” radical Shiite cleric Moqtada al-Sadr, who commands the Mahdi Army, said in a televised statement Monday.

Iran’s Supreme Leader Ayatollah Ali Khamenei put the Obama administration on the defensive ahead of the talks by publicly claiming his government has rejected numerous overtures from Washington to jointly cooperate against Islamic State.

Iraq’s new leaders reprimanded the U.S. and its European and Arab allies for not inviting Iran to attend the Paris conference.

“We had insisted for Iran to be there and we regret their absence,” Iraqi Foreign Minister Ibrahim al-Jaafari said in Paris, adding that Tehran had provided his government with “significant support” in fighting Islamic State.

Mr. Kerry acknowledged private discussions with Iran about Iraq and said the U.S. remained open to future discussions, including next week at the annual United Nations General Assembly in New York.

But the American diplomat ruled out any military cooperation with Iran in Iraq and Syria and intelligence sharing. He also acknowledged that his opposition to Tehran attending the Paris conference was driven, in part, by threats made by Saudi Arabia and the United Arab Emirates to boycott the meetings if Iranian officials attended.

“We’re not coordinating with Iran, but as I said, we’re open to have a conversation at some point in time if there’s a way to find something constructive,” Mr. Kerry said Monday.

The role of the Assad regime in combating Islamic State is also presenting a dilemma for the Obama administration.

“One cannot but feel concerned by publicly stated intentions to attack the [Islamic State] positions in Syria’s territory without interaction with the Syrian government,” Russian Foreign Minister Sergei Lavrov said in Paris. “Syria, as well as Iran, are our natural allies in the fight.”

Mr. Kerry, as in the case with Iran, offered somewhat contradictory statements on the U.S. positions toward Syria. He ruled out cooperation, but also said the U.S. would “communicate’ with Mr. Assad’s government to avoid any potential clashes with Syrian forces as the campaign against Islamic State gathered momentum.

“There are all kinds of ways of communicating to avoid mistakes or disasters,” Mr. Kerry said.

Current and former U.S. officials and Arab diplomats worry the buildup of the military campaign against Islamic State risks mirroring Washington’s interactions with Tehran and Damascus in the months both before and after the 2003 invasion of Iraq.

At the time, the Bush administration held extensive talks with Iranian officials to discuss the creation of a stable Iraq in the wake of Hussein’s fall. U.S. officials also discussed Iraq with Mr. Assad’s government, particularly concerning the flow of foreign fighters.

As the U.S. occupation of Iraq dragged on, however, Iran and Syria actively worked to undermine the U.S.’s goals of creating a stable and democratic government in Iraq, according to current and former U.S. officials. Iran and Syria have denied supporting extremist groups in Iraq.
U.S. officials said so far, Iran’s government hasn’t attempted to interrupt American military operations against the militants.

One U.S. official said intelligence showed that the commander of the Revolutionary Guard’s overseas operations, Gen. Qasem Soleimani, has explicitly ordered Iraqi Shiite militias not to target American personnel, arguing the weakening of Sunni militant groups was in Tehran’s interest.

Still, U.S. officials have voiced concerns that Iran could change its stance if they view American military operations in Iraq and Syria as posing a threat to Iran’s core objectives and the rule of Mr. Assad.

Mr. Khamenei on Monday indicated that this could eventually be the case.

“I said we will not accompany America in this matter because they have got dirty intentions and hands,” Iran’s most powerful figure said in a televised address. “They see pretexts to interfere in Iraq and Syria, just as they did in Pakistan, where [the U.S.] can commit any crime it wants.”

At Monday’s session, key U.S. allies, particularly those in the Middle East, gave no sign they were ready to commit to a military campaign in Iraq or Syria.

Even the U.K., one of Washington’s most reliable allies, is hesitant. U.K. Foreign Secretary Philip Hammond said his country would play a “leading role” in the fight against Islamic state but conceded: “We haven’t made a decision yet about how we will best contribute to the coalition.”

“Get ready to intervene,” Mr. Le Drian told French forces gathered at the Al Dhafra air base in the United Arab Emirates.