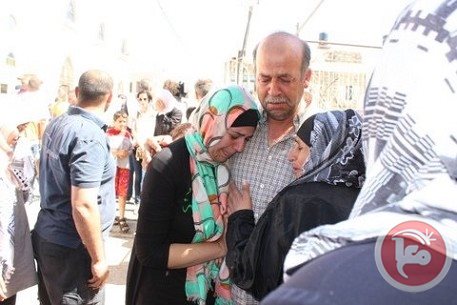 An autopsy of the Palestinian teenager who was snatched from an East Jerusalem street and slain this week found soot in his lungs that suggests he was burned alive, according to a senior Palestinian official briefed on the preliminary results.

The autopsy showed that 16-year-old Muhammad Hussein Abu Khdeir, who was buried as a martyr Friday in a funeral that drew thousands, had a head injury and burns over 90 percent of his body, the Palestinian attorney general, Mohammed Al A’wewy, wrote on his agency’s official website. The Israeli police are still investigating the Wednesday attack and have not named any suspects in what is widely believed to have been an act of revenge by Jews for the abduction-murder last month of three Israeli teenagers in the occupied West Bank.

Mourners carried the body of Muhammad Abu Khdeir, covered with a Palestinian flag, during a funeral ceremony on Friday.Tensions High in Jerusalem as Palestinian Teenager Is Given a Martyr’s BurialJULY 4, 2014
“It was obvious through autopsy that there was black smoke on the breathing airways, windpipes and in the two lungs,” the prosecutor’s site said. “This is proof of inhalation of this material during the torch, while he was alive.”

The autopsy was conducted by Israeli doctors and attended by the Palestinian coroner, none of whom could immediately be reached on Saturday.

Micky Rosenfeld, a spokesman for the Israeli police, said that there had been “no breakthroughs” as investigators continued to consider both revenge and other possible criminal scenarios, and that a gag order prevented him from discussing details of what they had found so far.

“We’re trying to understand and get to exactly what took place and what was the background,” Mr. Rosenfeld said. “It’s critical, as far as the Israeli police are concerned, it’s critical for us to determine what the motive was.”

Muhammad’s relatives and Palestinian leaders have criticized the police and the Israeli media for suggesting that the grisly death might have been an honor killing or stemmed from a family dispute.

Muhammad was sitting on a wall outside a mosque and his home in the East Jerusalem neighborhood of Shuafat at 3:45 a.m. Wednesday, waiting for the dawn prayer, when a gray Hyundai pulled up and two people forced him into the car, according to video footage that news outlets obtained from security cameras. His charred body was found in the Jerusalem Forest about 90 minutes later; on Thursday, burned pieces of a white undershirt could still be seen on a black spot at the site.

Human rights groups have also lashed out at the police for what they said was a brutal beating by undercover officers of Tarq Khdeir, 15, an American-born cousin of Muhammad who was spending his summer vacation in Jerusalem. They circulated a video of the beating and pictures of Tariq’s badly bruised and swollen face, and complained that he was being held by the police without charge.

“The continued state-sanctioned violence against children is unlawful and unacceptable,” Addameer, a Palestinian group that supports prisoners in Israeli jails, said in a news release.

The Council on American-Islamic Relations, noting that Tariq is a high school student in Tampa, Fla., called on the State Department to intervene and secure his release. An American consular officer was scheduled to meet the teenager Saturday afternoon, ahead of a court hearing scheduled for Sunday.

Mr. Rosenfeld, the police spokesman, said the video circulated by the rights groups was “edited and biased” and did not represent the scope of the events, and that Tariq was one of six people who had been arrested Thursday after clashes in which 15 police officers were injured.

“Hundreds of rioters, many of them masked, hurled at the forces pipe bombs, Molotov cocktails, fireworks and stones,” Mr. Rosenfeld said. “Preliminary investigation of the details of the incident shown in the video indicates that there were six masked Palestinians, and that three of them were armed with knives. They resisted arrest and attacked the officers.

“How does a 15-year-old American student end up attacking security officers and rioting with hundreds of masked Palestinians?” he asked.

After hours of raging violence in the streets of Shuafat Wednesday afternoon and evening, there have been sporadic clashes between Palestinians and Israeli security forces there and in other neighborhoods of Jerusalem, as well as in Arab-Israeli towns and parts of the West Bank.