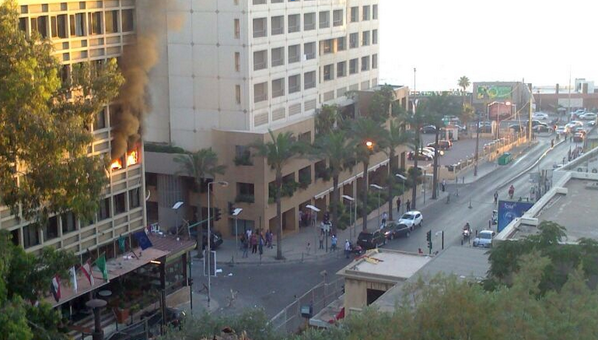 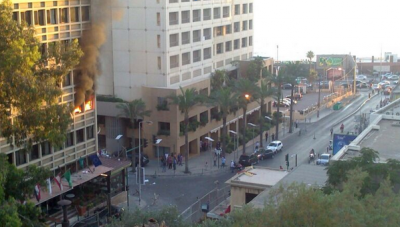 The suicide bomber that targeted a Beirut hotel on Wednesday night, wounding three officers, was identified as 20-year-old Saudi national Abdul-Rahman Nassir al-Shneifi and has been on a most wanted list by the Saudi authorities, sources told Al Arabiya News Channel Thursday.

Al-Shneifi left the kingdom on March, the sources said, without giving further details.

Lebanese security services said a second suspected Saudi militant, who was wounded in the blast, was arrested at the scene of the explosion, which targeted the Duroy hotel, some 20 meters from Saudi Arabia’s embassy.

“The suicide bomber wanted to blow himself up at another place and security measures were taken to prevent the suicide bomber from reaching his target,” Interior Minister Nihad al-Mashnouq told Lebanese television.

“When the security forces entered their hotel room, they blew themselves up by detonating the explosives beside them. One died and the other is wounded,” a Lebanese official told AFP.

A group named the Brigades of the free Sunni Muslims claimed responsibility for the evening attack in the bustling district of Raouche and said “other of our mujahedeen brothers safely fled the area where the operation took place.”

Lebanon’s National News Agency said a suitcase set to explode was also located in the vicinity of the hotel and authorities had been dispatched to disable the device.

Military Investigative Judge Saqr Saqr said at least three members of the security forces were wounded in the explosion which left the multistory building on fire.

Beirut’s streets have been busy in the evenings with people watching the World Cup at cafes in the warm summer weather.

Ethnically mixed Lebanon has suffered a wave of sectarian violence linked to the war in Syria which, like its neighbor Iraq, is fighting a Sunni Muslim insurgency.

On Monday night, a suicide bomber blew up his car near an army checkpoint in Beirut, killing himself and a security officer. Three days earlier, the head of Lebanon’s General Security service narrowly escaped a suicide bombing near the Syrian border.

Police had been monitoring a group of men who had booked into the four-star Duroy hotel several days ago and the two men linked to the bombing had arrived recently, the sources said.

Earlier on Wednesday the Lebanese army said its intelligence unit had arrested five men suspected of planning to kill senior security officials in the north of the country, according to Reuters.

It said the men were part of a “terrorist cell” in Qalamoun, near the Mediterranean city of Tripoli. The army was still trying to track down the remaining cell members, it said.

Lebanon has been increasingly drawn into Syria’s crisis. Lebanese Shi’ite group Hezbollah has been fighting alongside President Bashar al-Assad’s forces against the mainly Sunni Muslim rebels, who have also been supported by Lebanese Sunnis.

The violence has also spilled over the border, with rocket attacks on Shi’ite towns in the Bekaa Valley, close to the frontier with Syria, and bombings of Shi’ite and Sunni targets in Lebanon’s main coastal cities.
Al Arabiya