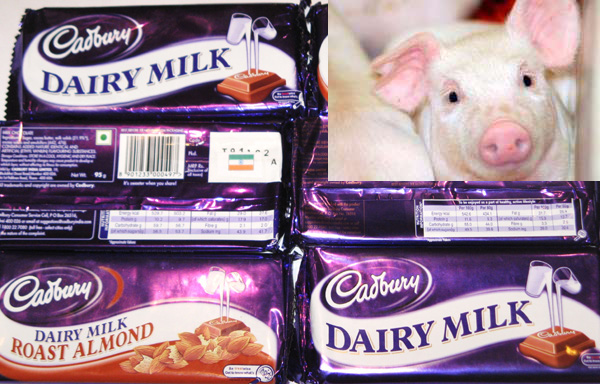 Cadbury Confectionery Malaysia Sdn Bhd has recalled two batches of its chocolate products which have tested positive for porcine DNA (Traces of Pork) by the Health Ministry.
Share:

Saudi Arabian authorities have said they are testing Cadbury chocolate bars for traces of pork DNA after two of its products in Malaysia were found to contain it.

The Saudi Food and Drug Authority (SFDA) said in a statement, published on its website on Saturday, that it had taken samples of Cadbury chocolates from the local market to test for contamination.

Pork is strictly prohibited in Islam.

The statement quoted Dr. Salah Al-Maiman, vice president of the food sector of the SFDA, as saying that the products being tested did not include Cadbury products manufactured in Malaysia, and were imported from other countries such as Egypt and the UK.

The scandal over the ingredient discovered in Malaysian Cadbury’s chocolates has prompted outrage among some Muslim groups in the country, who have called for a boycott on all products made by the company and its parent company Mondelez.

The Saudi statement said the SFDA was in touch with Malaysian authorities about the testing.

Malaysian authorities have warned it remains unclear if the contamination of the two Dairy Milk varieties was Cadbury’s fault or a result of “external factors”.

“People need to understand that we can’t immediately take action against Cadbury when there’s no solid evidence yet or if contamination occurred in the factory itself or if it was external factors,” said Othman Mustapha, the director general of Malaysia’s Department of Islamic Development, or JAKIM.

Cadbury Malaysia said in a statement on Friday that it had withdrawn the two products as a precaution and that it had no reason to believe there was pork-related content in its other foods.

“We stand by our halal certification and we have the highest levels of product labelling standards,” it said.

On Friday, Indonesia, the most populous Muslim nation in the world, said that it too was testing Cadbury products to check that they complied with Islamic standards.