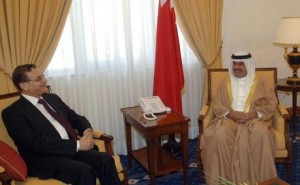 “We respect the particularity of the countries in the region and Lebanon vowed to follow a disassociation policy towards their internal affairs,” Mansour said after meeting with Bahrain’s Deputy Prime Minister Ali bin Khalifa Al Khalifa in the Gulf state, explaining that this approach has been followed by Lebanese officials since the independence.

He stressed: “All statements made by Lebanese politicians strictly reflect their own points of views”.

Mansour ‘s statement comes after President Michel Suleiman urged last week all Lebanese politicians to abide by the principles of the Baabda Declaration and refrain from meddling in the affairs of other Arab countries and at the same time he told the Arab states to ignore remarks made by some politicians because they not reflect the official stance of Lebanon.

This was in reference to remarks made by Free Patriotic Movement leader Michel Aoun in support of the anti government protesters in Bahrain.

“The opinions of Lebanese politicians do not reflect those of the Lebanese Cabinet,” Suleiman stressed.

Bahrain on February 15, summoned the Lebanese charge d’affaires at the Lebanese Embassy Ibrahim Assaf over remarks made by Aoun , which Bahrain considered “irresponsible meddling in its internal affairs.”

Aoun had told al-Alam on February 13 that the demands of the protesters in Bahrain are “fair and justified.”

Aoun is closely associated with the Hezbollah militant group which , along with its backer Iran has been supporting the uprising against the monarchy in Bahrain.

Prime Minister Najib Mikati was the first to telephone his Bahraini counterpart Sheikh Khalifa bin Salman to stressing that Lebanon respects Bahrain’s sovereignty and to ignore the stances voiced by some Lebanese leaders since they do not reflect the government’s official stance.

Several political factions attacked the FPM leader’s remarks, expressing that they “threaten the businesses and the futures of many Lebanese in the countries of the Gulf Cooperation Council”.