Hopes for a deal remain dim as Iran talks extended 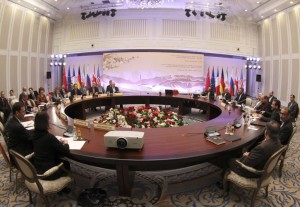 The unscheduled extension came after a day of private exchanges that one Western diplomat characterized as “useful.” The United States and five other powers started the talks with a new proposal calling on Iran to give up parts of its nuclear program in exchange for partial relief from economic sanctions.

Western officials offered few details about the discussions, which began early Tuesday in the snow-blanketed Kazakh city of Almaty. But Iranian news media pointedly denied that any deal had been reached on suspending Iran’s production of enriched uranium.

Iran’s semiofficial Fars News Agencyquoted a member of the country’s negotiating team as saying it was “not true” that Iran had agreed to consider a halt in uranium enrichment in return for sanctions relief.

Iranian diplomats met for three hours with delegates from the so-called P5-plus-1 — the five permanent members of the U.N. Security Council and Germany. They then met separately with leaders of several European delegations before announcing that the negotiations would continue for a second day.

The nuclear talks, the first in eight months, began amid low expectations, with U.S. and European officials expressing hope for modest momentum that could lead to a comprehensive deal with Iran in the months to come.

“We have come here with a revised offer, and we have come to engage with Iran in a meaningful way,” Catherine Ashton, the European Union’s representative at the talks, told reporters as the discussions began Tuesday. “Our purpose [is] to make sure that we’ve had a good and detailed conversation, with the ambition that we see progress by the end of the meeting.”

Iran’s chief negotiator, Saeed Jalili, blamed Western governments for the lack of progress since the last round of talks ended in failure last June. Tehran was still waiting for “logical and reliable answers to Iran’s comprehensive proposals” from eight months ago, Jalili told a separate news conference.

Western governments are pushing Tehran to agree to limits that would make it much harder for Iran to acquire nuclear weapons. Iran, which denies seeking nuclear weapons, has insisted on immediate relief from U.N. and Western economic sanctions as a precondition for any concessions on its nuclear program.

Traveling in Europe, Secretary of State John F. Kerry declined to answer a question about whether Iran is merely playing for time.