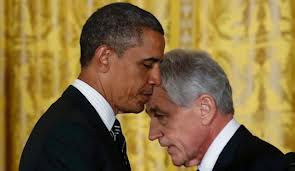 The weeklong Senate recess gives outside interest groups opposed to Chuck Hagel’s nomination to become defense secretary more time to sharpen their attack against President Barack Obama’s choice. And they’re not wasting any of it, promising to redouble their efforts to scour Hagel’s record and to pressure senators to vote against him.

While Senate Republicans have succeeded in delaying a confirmation vote on Hagel’s nomination, they signaled that they would eventually relent and allow an up-or-down vote after they return from their recess on Feb. 25. But that leaves an uncomfortable gap for Hagel and the White House, which doesn’t want any surprises popping up that would further delay or possibly derail his confirmation. But the fuss has underscored a key dynamic: Even if Hagel is confirmed, his relations with House and Senate Republicans could be frostier than the Obama administration might have hoped.

“You need a strong secretary of defense, and I think through this process he’s been weakened and it might be better to just go back to the drawing board,” House Armed Services Committee Chairman Howard “Buck” McKeon told reporters on Friday.

White House spokesman Josh Earnest said Friday that the delay was a political tactic and that Obama is still confident Hagel will be confirmed. “I wouldn’t be surprised if there are additional politics that are injected into this circumstance,” he said. “It is extremely unfortunate.”

The GOP-leaning Americans for a Strong Defense plans to take full advantage of the lull. Spokesman Ryan Williams said the organization is stepping up a grass-roots campaign to flood Senate offices with calls from constituents who want to see Hagel’s nomination rejected. It also will push for greater disclosure of financial information about Hagel’s paid speeches and foreign donors to private organizations and businesses that the former Nebraska Republican lawmaker was affiliated with after he left the Senate in 2009.

“We’re going to be ramping up our grass-roots efforts, speaking to local community leaders in states where senators have not said how they will vote on the final nomination,” Williams said.

While Hagel has said he’s a strong supporter of Israel, his past reference to “the Jewish lobby” and opposition to a military strike against Iran antagonized pro-Israel groups. The Emergency Committee for Israel said it will continue to try to convince a majority of senators that there are better choices than Hagel to lead the U.S. armed forces and manage the federal government’s largest bureaucracy.

“The nomination process has moved faster than the disclosure process, and it’s likely we still don’t know everything we should about Hagel’s record,” said Noah Pollak, the group’s executive director. “The upcoming week is a chance to catch up.”

Hagel’s nomination was met with intense opposition from GOP senators, who challenged his past statements and votes on Israel, Iran, Iraq and nuclear weapons. But Hagel’s criticism of the President George W. Bush’s administration simmers beneath any policy disagreements, Earnest told reporters traveling aboard Air Force One.

Earnest read a transcript of an interview Sen. John McCain, R-Ariz., gave to Fox News on Thursday in which McCain said “there’s a lot of ill will” toward Hagel because he “attacked President Bush mercilessly” and said the surge of U.S. troops in Iraq “was the worst blunder since the Vietnam War.”

“He was anti-his own party and people,” McCain said. “People don’t forget that.”

In choosing Hagel, a former GOP senator and twice-wounded Vietnam combat veteran, the White House expected him to be an asset, not a liability, among Republicans who are often critical of Obama’s national security policies.

But in the likely event that he is confirmed, Hagel’s his relations with Republicans on the Senate Armed Services Committee are almost sure to be strained. The panel’s GOP members, including McCain, James Inhofe of Oklahoma, Lindsey Graham of South Carolina, Kelly Ayotte of New Hampshire and Ted Cruz of Texas, were among Hagel’s harshest opponents.

McCain and Graham had been blocking the confirmation of their former colleague until they received information from the White House on when Obama contacted Libyan officials after the attack on the U.S. diplomatic mission in Benghazi last September in which Ambassador Chris Stevens and three other Americans were killed. The White House responded to the question Thursday, but that did not stop Republicans from blocking a confirmation vote on Hagel, at least temporarily.

“I would argue that this man’s record, when it comes to Iran and Israel, and statements he has made, puts him well out of the mainstream,” Graham said.

As a member of the House, McKeon, R-Calif., doesn’t get a vote on Hagel’s confirmation. But he said Friday that he has the same concerns as Senate Republicans.

Hagel is not without support from a potent constituency: military veterans. The Veterans of Foreign Wars, the Military Officers Association of America, and the American Legion have all backed him.