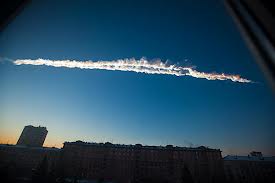 A meteor plunged toward earth over Russia’s Ural Mountains Friday, exploding into flames in a powerful blast that damaged buildings in nearby areas, injuring around 1,000 people.

Amateur videos broadcast on state television showed an object streaking across the sky, trailing smoke, around 9:20 a.m. local time before bursting into a fireball. It caused a sonic boom from which residents in the city of Chelyabinsk, the largest in the affected region, described a shock wave that blew in doors, smashed glass and set off car alarms.

“The light was so intense that it completely illuminated the courtyard of our apartment block,” said Sergei Zakharov, head of the Russian Geographical Society in Chelyabinsk. “The sound, the shock wave came around six minutes later. No one could understand what had happened. I’d compare it to the explosion of a large flare bomb.”

Almost 1,000 people sought medical attention, mostly for cuts from flying glass, and 43 were hospitalized, the Emergency Situations Ministry said. Around 3,000 buildings were damaged by the blast, which blew a hole in the walls of a metals factory in Chelyabinsk, approximately 900 miles east of Moscow.

Children were sent home from schools, and the explosion temporarily knocked out one mobile operator’s network.

The unusual sight sowed confusion among some locals. Amateur video showed children in one school streaming out of a classroom and screaming.

“That kind of light doesn’t happen in life, only at the end of the world,” Vlada Palagina, a Chelyabinsk schoolteacher, told the LifeNews website.

“We thought an airplane had crashed,” said a woman who answered the phone at the city administration.

Officials moved quickly to calm residents, saying there was no threat to human life from the rock fragments that hit the earth outside Chelyabinsk. Most of the meteor burned up before pieces hit the ground, scientists said.

“There’s no major destruction,” Chelyabinsk regional Governor Mikhail Yuyevich wrote on his blog. “The main task now is to maintain heat in the apartments and offices where the glass was smashed.”

Scientists said the incident was a rare event, both in terms of the size of the rock and the number of injuries it caused.

“There have been reports of one or two people being injured in the past. This is entirely unprecedented,” said Keith Smith, an astronomer at Britain’s Royal Astronomical Society.

Dr. Smith said there was no connection between the meteor event in Russia and the 130,000-ton asteroid that harmlessly passed about 17,000 miles from Earth on Friday. Planetary scientist Samuel Kounaves at Tufts University in Boston also said there likely was no connection.

In Russia, dozens of fragments of the meteor hit the ground, officials said, and search teams set out looking for meteorites outside Chelyabinsk.

Local police described how one piece smashed into the ground near Lake Chebarkul, throwing up a column of ice, water and steam and creating a 26-foot crater.

The meteor was several yards in diameter and weighed around 10 metric tons, Russia’s Academy of Sciences said in a statement. “The object entered the atmosphere at a speed of 15 to 20 kilometers (9 to 12 miles) per second, disintegrated at a height of 30-50 kilometers. The movement of fragments at large speed caused a powerful emission of light and a strong shock wave,” the academy said.

According to the U.S. National Aeronautics and Space Administration, meteoroids smaller than 25 meters usually burn up as they streak through the atmosphere, causing little or no damage.

Earth is bombarded with more than 100 tons of dust and sand-sized particles every day, much of it falling into the oceans or remote areas, and otherwise going unnoticed. About once a year, a car-size asteroid enters the atmosphere, though it usually burns up before hitting the surface.

It is only every 2,000 years or so that an object the size of a football field descends to earth and causes significant damage, according to NASA. Giant asteroids that crash to earth—such as the one that most likely extinguished the dinosaurs—tend to occur on the scale of millions of years.

Scientists will likely rush to the site in Russia where the meteor was observed. Astronomer Dr. Smith said there has probably been only one case—in Sudan in 2007—where researchers were able to follow the track of a meteor as it came down and recover pieces of it on the ground.

Russian Deputy Prime Minister Dmitry Rogozin called for leading world powers to create an early-warning system, and consider technology to shoot down meteors. Roskosmos, Russia’s space agency, said it was impossible to track objects falling as fast as the meteor.