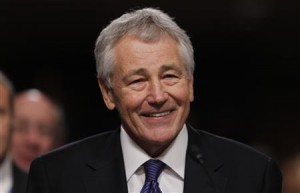 Republican lawmakers succeeded on Thursday in delaying a Senate vote on confirming President Barack Obama’s choice of Chuck Hagel as defense secretary, but another vote was planned for later in the month and Obama said he expected his nominee to be approved.

The tally was 58-40, with almost every Republican voting no, falling short of the 60 needed to pass a motion to stop debate and allow a vote by the full Senate on confirming the former Republican senator.

The result delayed, but did not end, Hagel’s hopes of becoming the civilian chief at the Pentagon.

Democrats were furious at the delay, which they characterized as the first time in history that the procedural tactic known as a filibuster had been used to block a defense nominee, something disputed by Republicans.

“I’m going to go call Chuck Hagel when I finish here and say I’m sorry, I’m sorry this has happened,” the Senate majority leader, Democrat Harry Reid said on the Senate floor after the vote.

Charging the opposition party with trying to score political points against Obama’s White House, Democrats said Republicans were putting the country at risk by delaying the filling of a major security post.

“My expectation and hope is that Chuck Hagel, who richly deserves to get a vote on the floor of the Senate, will be confirmed as our defense secretary,” Obama said in an Internet question-and-answer session hosted by Google+. “It’s just unfortunate that this kind of politics intrudes at a time when I’m still presiding over a war in Afghanistan.”

Republicans insisted they were not using a filibuster and not trying to kill the nomination, which has faced bitter opposition since Obama picked Hagel on January 7.

John Cornyn, the second-ranking Republican in the Senate, said that Republicans just wanted more time and more information from Hagel.

“This is not any attempt to kill this nomination. This is not a filibuster,” he said, during several minutes of heated debate on the Senate floor after the vote.

Reid set another vote on the motion for February 26, after a weeklong recess. Republicans said they expected the motion would pass then, after they have had more time to consider the nomination.

With Democrats controlling 55 votes in the 100-seat Senate, Hagel’s nomination is expected to win the simple majority of 51 votes needed for his confirmation as the civilian leader at the Pentagon, once such a vote is allowed.

If confirmed, Hagel, 66, a decorated Vietnam War veteran, would replace 74-year-old Leon Panetta, who has said he will remain in his post until his successor is in place but is longing to retire to his California walnut farm.

Pentagon spokesman George Little said in a statement that Panetta would continue to serve as defense secretary and attend a NATO meeting in Brussels next week.

Republicans had been in negotiations with the White House on a compromise under which at least a handful of Republicans would agree to let the confirmation go ahead if the procedural vote were delayed until after next week’s recess.

One major sticking point was the Obama administration’s refusal to release more information about the deadly September attacks on U.S. facilities in Benghazi, Libya.

The struggle over Hagel’s nomination is one of many battles raging between Obama’s Democrats and Republicans in Congress, including disputes over gun control, immigration rules and dealing with huge budget deficits.

Hagel broke from his party as a senator by opposing former President George W. Bush’s handling of the Iraq War, angering many Republicans. Some Republicans have also raised questions about whether Hagel is sufficiently supportive of Israel, tough enough on Iran or capable of leading the Pentagon.

His performance at his confirmation hearing before the Senate Armed Services Committee also drew harsh criticism. Even some Democrats have said he appeared unprepared and at times hesitant in the face of aggressive questioning.

The panel voted 14-11 along party lines on Tuesday to advance Hagel’s nomination to the full Senate.

Republican Senator John McCain, for example, had said he opposed procedural tactics to block the vote on Hagel, but changed his mind in order to press the White House to release more information on Benghazi.

“As far as we are concerned on this issue, there are other questions. We feel the intervening week and a half is sufficient time to get those questions answered,” McCain told a news conference with fellow Republican Senators Lindsey Graham and Kelly Ayotte, who have been among the most vocal Hagel critics.

Republicans said that Reid brought the uncertainty on himself by trying to rush Hagel’s confirmation. Obama nominated Hagel on January 7 and his hearing before the Armed Services panel took place on January 31.

Democrats said the time frame was not unusually short. They also noted that many of Hagel’s most vocal opponents served with him during his two terms as senator from Nebraska from 1997 to 2009 and knew him well.

The confirmation of another of Obama’s national security nominees, John Brennan for CIA director, also faces a delay as the White House and lawmakers joust over the release of sensitive documents, including some related to Benghazi.