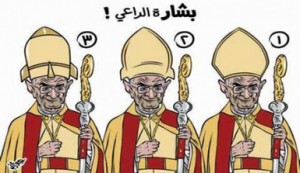 A criminal complaint has been filed against the Saudi newspaper al-Watan over the publishing of a cartoon mocking Maronite Patriarch Beshara Rai and criticizing his visit to Syria, according to a report by LBC

Attorney Wadih Aql filed the complaint with the general prosecutor’s office against the newspaper’s publisher, its editor-in-chief and the cartoonist , Jihad Awrati, the report added.

Aql accused them of slandering the patriarch and inciting strife and racism, according to VOL radio.

The Saudi newspaper published on Tuesday a carton depicting the Maronite Patriarch in a derogatory manner, replacing his miter with a rocket and highlighting the common letters between the patriarch and the Syrian president’s names in Arabic, ( Beshar) following his visit to Syria over the weekend.

Jihad Awrati’s cartoon sparked outrage in social media platforms for what viewers saw as a disrespectful depiction of the Maronite head of church, LBC added in its report

Rai’s controversial visit to Syria, which was aimed at taking part in the enthronement celebration of the Greek Orthodox Patriarch of the Levant and Antioch Youhanna al-Yaziji, created a heated debate locally. 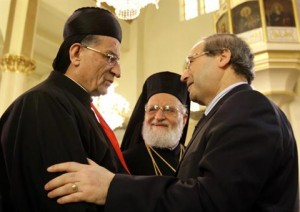 Syrian Deputy Foreign Minister Faisal Meqdad, who was seen on TV footage talking to Rai as they entered the ceremony, suggested last Sunday that the patriarch’s visit was a nod of support for the embattled regime.

“Patriarch Rai has corrected the wrong that was done in the past decades,” with the failure of previous patriarchs to come to Syria,” Meqdad said.

This was understood by observers to be a direct attack against former Patriarch Nasrallah Boutros Sfeir who despised the Syrian regime and refused to go to Syria.

Meqdad added that the turnout at the event “represents a stand in the face of the West, telling them not to interfere in our affairs and stop slaughtering and killing our people, and this is what Patriarch Rai has reiterated.”

He was referring to Rai’s earlier comment that reforms in Syria are “necessary, but should not be imposed from the outside.”

Meqdad welcomed Rai, saying that the people of Syria and Lebanon are one and “Rai is now in his homeland and we welcome him in his country and among his people. We welcome the values, the legacy, the history and civilization he represents.”

Rai is the first Maronite patriarch to visit Syria since the two countries gained independence in 1943. His visit was criticized by some Lebanese opposition politicians, but he emphasized that it was “merely pastoral” and that he had gone to “meet the Christians, notably the 60,000 Maronites,” stressing that the church is “always against war and for dialogue.”

But March 14 MP Boutros Harb warned Rai before he left that the Syrian regime could exploit such a visit to its benefit:

“I know that the visit is religious, but I fear the Syrian regime will give the trip a political dimension to spread rumors that the Maronite Patriarchate is supporting one Syrian side at the expense of the other, and ultimately engage the church in the Syrian conflict,” Harb told Voice of Lebanon.

Harb also expressed fears that the Maronite church would be pushed into the Syrian crisis.