Rebels selling artifacts to fund the fight against Assad

MAFRAQ, Jordan — To the caches of ammunition and medicines that they lug each day from this border city back into their homeland, Syrian rebels have 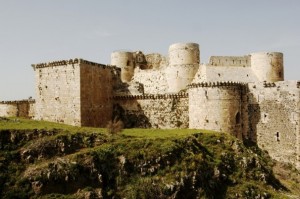 The rebels, struggling to finance their effort, have joined an emerging trade in illicitly acquired Syrian artifacts and antiquities, selling off the country’s past as the war for its future intensifies.

“Some days we are fighters; others we are archaeologists,” Jihad Abu Saoud, a 27-year-old rebel from the Syrian city of Idlib, said in an interview in this northern Jordanian city. Saoud claimed to have recently uncovered tablets from the Bronze Age city of Ebla inscribed in the Sumerian script.

Since the onset of the conflict in Syria, the international community has expressed alarm over the fate of the country’s diverse heritage landmarks and stunning archaeological sites, as rebel and government forces have transformed historical treasures such as the 1,000-year-old Aleppo souk and the crusader castle Crac des Chevaliers into theaters of war.

As the war nears its third year, the United Nations and conservationists warn that Syria’s historical sites face a new and more dangerous threat: a sophisticated network of smugglers and dealers — prime among them members of the cash-strapped insurgency — looking to capitalize on the country’s cultural riches.

“In light of previous experiences in situations of conflict, with respect to cultural heritage, the risk of looting and illicit trafficking of Syrian cultural objects appears to be high,” said Anna Paolini, head of the Jordan office of the U.N. Educational, Scientific and Cultural Organization.

The extent of the trade is unknown because of difficulties accessing historical sites in the war-torn country, according to UNESCO, which hosted a regional workshop in Amman on Sunday on protecting Syrian cultural heritage from trafficking. There are conflicting reports about the fate of artifacts from Syria, long a cultural crossroads.

Twelve of the country’s 36 museums have been looted, according to the France-based Association for the Protection of Syrian Archaeology. In a Jan. 22 report, however, the Syrian Directorate General of Antiquities and Museums said the bulk of the items have been accounted for and transferred to secure locations.

Only two pieces have been taken from display cases since the start of the conflict, the ministry reported: a bronze statue from the northwestern city of Hama dating to the Aramaic period and a collection of marble figurines and tablets from the museum at Apamea.

Yet Syrian authorities and conservationists concur on the increasing vulnerability of the country’s archaeological sites, which, according to the government report, have been subject to “several” acts of vandalism and illegal excavations.

“This isn’t just the history of Syria but the history of mankind at stake,” said Maamoun Abdulkarim, head of the Syrian antiquities directorate. Before the conflict, he said, plunderers “were digging at night. Now they are digging in broad daylight.”

Conservationists and officials in Damascus say the emerging trade is driven by an increased desperation among rebel forces, who control the bulk of Syria’s archaeologically rich regions.

Although the rebel Free Syrian Army has repeatedly stressed its commitment to the protection of heritage sites, rebel leaders defend their participation in the illegal antiquities trade, deeming it a vital source of funding to sustain their uprising. Average hauls can command $50,000 on the black market, rebels said in interviews.

“We have been left to face an entire army without arms, without money and without help from the outside world,” said Abu Mohammed Hamad, an FSA coordinator at a safe house in the Jordanian city of Ramtha who described overseeing the excavation of Roman tombs outside Damascus, the Syrian capital. “It is within our right to use whatever resources we can find.”

Syrian rebels interviewed said they have begun dispatching loosely formed “excavation teams” — groups of young men who scour archeological sites for gold, mosaics, statues and other transportable artifacts that can be sold easily.

In a little over three months — a period in which rebels say looting has accelerated — the excavators claim to have uncovered an inventory that reads like the index of a history textbook: Bronze Age vessels from the southern town of Tal Shihab, Byzantine mosaics from the Church of St. Simeon near Aleppo and statuettes more than 2,000 years old from Bosra, an ancient city that is home to a well-preserved Roman theater.

Jordan has emerged as the primary first stop for the goods, according to the rebels, who said Turkey and Lebanon also are active markets. The rebels and Jordanian security sources say most of the illicitly acquired artifacts are smuggled into Jordan amid the daily influx of about 2,000 refugees. They end up on the market in Amman, the Jordanian capital, where merchants have reported a flood of Syrian artifacts in recent weeks.

“Every day we are getting calls about Syrian gold, Syrian mosaics, Syrian statues,” said Mohammed Khalil, an antiques dealer in Amman. “Damascus is being sold right here in Amman, piece by piece.”

At one downtown Amman shop, a merchant who gave his name only as Ahmed cleared his countertop of the keychains and Chinese-manufactured bottles of “holy water” he reserves for foreign tourists. He arranged a row of artifacts that he said represented a span of the various civilizations that once thrived in ancient Syria — red earthen Bronze Age vases, blue Iron Age glass vessels, the head of a marble Roman statue and a gold-encrusted dagger from the early Islamic period.

“This is only a sample. I keep the rare pieces at home,” said Ahmed, adding that he acquired the items from a Syrian dealer in Amman, who told him that they came from families that had fled the fighting.

In Amman, Syrian smugglers and intermediaries said the artifacts command prices that range from $50 for a stone vessel to $3,000 for statues and stone tablets. Jordanian traders then sell the items for prices that are three times as high. Ahmed, the merchant, said the hottest antiques are Nabataean-era and Aramaic-inscribed stone tablets, which he said wealthy patrons use to adorn hallway entrances of their Amman villas.

The influx of artifacts is familiar for authorities in Jordan, which served as a transit point for Iraqi archaeological treasures looted after the fall of Baghdad in 2003.

Although battle-tested, Jordanian customs officials have yet to break the growing Syrian smuggling network. On Saturday, Jordanian police seized 40 Syrian artifacts in a raid of an apartment in Ramtha, the largest hoard of smuggled Syrian antiquities discovered in Jordan since the onset of the conflict.

“It is still too early to compare the situation in Syria with what happened in Iraq,” said Jordanian Tourism and Antiquities Minister Nayef Fayez, whose department is tasked with tracking down and repatriating trafficked antiquities. “But wherever you have a lack of security, archaeological sites are one of the first victims, and this is what we are beginning to see in Syria and expect to see on a much larger scale.”

Increased pressure from authorities has begun to scare Jordanian merchants off the trafficked goods. But the merchants often serve as middlemen, arranging meetings between smugglers and private collectors or traders who export antiquities to Europe, North America and Asia.

The items have yet to hit international auction houses, said Martin Wilson, general counsel for Christie’s and head of its art law department. But Wilson said Christie’s would remain “vigilant,” because “it is possible that in years to come, they may be offered to us when they have passed through many hands.”

The greatest obstacle to curbing antiquities traffic is the attitude of smugglers, who defend their trade as a natural part of war.

“People may judge us and call us thieves,” said Abu Majed, 30, a Syrian army defector who runs the southern Syrian smuggling routes, each night navigating the steep valleys separating the war zone from Jordan. “But sometimes you have to sacrifice the past in order to secure the future.”

On a recent night, he groaned as he set down the duffel bag he had carried more than nine miles across the border to a safe house in Mafraq.

“I almost died 10 times just to bring this,” Abu Majed said as he lifted a hand-carved statue that he said dated to the Nabataean period, more than two millennia ago. “And it would have been worth it every time.”

Photo: As the war nears its third year, the United Nations and conservationists warn that Syria’s historical sites face a new, more dangerous threat: a sophisticated network of smugglers and dealers looking to capitalize on the country’s cultural riches.