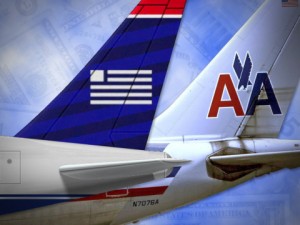 American Airlines, a storied but struggling carrier that sought bankruptcy protection 15 months ago, has agreed to merge with US Airways, creating what will be the largest carrier in the world.

After weeks of discussion and speculation, the boards for the two carriers voted on Wednesday to combine, a person close to the discussions but who was not authorized to speak publicly told USA TODAY. The deal, the particulars of which weren’t disclosed, will be announced Thursday. It would still need the approval of the bankruptcy court overseeing American’s restructuring, as well as federal regulators.

If the tie-up is approved, the marriage of US Airways and American would represent the last significant merger in the U.S. airline industry.

Delta and Northwest, United and Continental, and Southwest and AirTran all paired up in the last five years. A union of US Airways and American would mean that four mega-size carriers control 87% of the U.S. airline industry’s seats, according to Seth Kaplan, an analyst for Airline Weekly, an industry trade publication.

Less competition may lead to higher fares in some markets, some industry observers say.

“For consumers, you have a smaller, less competitive industry with somewhat higher fares than you would have had the mergers not happened,” Kaplan says.

But “on the other hand, you have airlines that can now invest in their product,” like roomier seats in the premium cabins or better entertainment, Kaplan says. “For years U.S. airlines were just trying to get through the day. They didn’t have money for those types of things.”

Details of the deal have yet to emerge, but US Airways CEO and Chairman Doug Parker has said that a newly combined airline would hold on to American’s iconic name, and locate its headquarters in American’s hometown of Fort Worth.

In the wake of a merger, a smaller hub, such as US Airways’ foothold in Phoenix, may see some service migrate to a larger portal like Dallas, American’s base. But as of January, US Airways and American had overlapping non-stop service on only a dozen routes. That means they likely won’t have to pare many destinations.

Instead, passengers on the newly merged airline will be able to fly across a vastly expanded map that would likely include US Airways’ East Coast hubs of Charlotte and Philadelphia and American’s strong international presence across the Atlantic and in Latin America. The combined carrier will also likely stick with American’s frequent-flier program, the industry’s oldest and one of its most popular.

“In the short term, frequent fliers will benefit from more routes and more choices, and a management that will likely want to reassure them that the benefits they’re used to won’t change,” says Gary Leff, co-founder of the frequent-flier community Milepoint.com and author of the ViewFromTheWing.com blog.