FSA to seize Mikati’s assets in Syria for supporting Assad 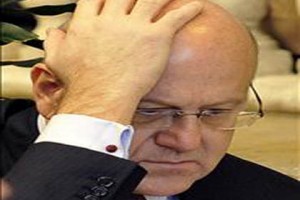 The Free Syrian Army (FSA) is in the process of taking a decision to seize Lebanese Prime Minister Najib Mikati’s assets in Syria and issuing an arrest warrant against him for being allegedly involved in the murder of Syrian citizens.

“The revolution judiciary council has made a unified decision to assign the Aleppo revolution inspection body with the task of conducting a survey of the property and businesses of Mikati and his brother Taha Mikati on all Syrian territory,” FSA spokesperson Louay Almokdad told MTV on Wednesday.

He added that “all this comes as a prelude to seizing [his properties and businesses] following his blatant involvement in supporting the regime.”

The Unified Judicial Council of the Revolution in Damascus had issued an arrest warrant against Mikati, his brother and his nephew Azmi Taha Mikati, which Al-Hayat newspaper obtained a copy of.

The judiciary accused Mikati of “contributing to the murder of Syrian citizens and facilitating the regime of President Bashar al-Assad’s obtaining of fuel for its military vehicles.”

Mikati was also accused of conducting financial activities for Assad, his wife, and to people close to him, in addition to money laundering and buying assets for them through the commercial companies of the Mikati family.”

The revolution judiciary tasked the FSA brigades and the revolution security forces with arresting them as soon as they set foot in Syria and gave its orders to send copies of the arrest warrants to the Arab League Chief Amr Moussa, the Organization of the Islamic Conference and the Libya, Tunisia, Yemen, and Egypt foreign ministers.

Mikati’s sizeable business holdings included in the past stakes in Syria’s telecommunication sector.

Syria is witnessing a violent uprising against the regime of President Bashar al-Assad, which has so far killed more than 60,000 people since its outbreak in March last year, a watchdog group said.