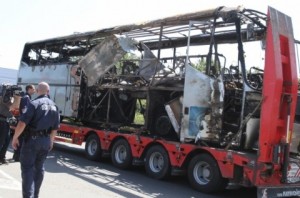 Bulgaria demanded from Lebanon the extradition of the two Hezbollah suspects in the Burgas bus bombing that killed fives Israeli citizens, a Bulgarian and the Hezbollah member that was tasked with the detonation of the bomb,Bulgaria’s Standart News reported on Saturday.

The newspaper said that Bulgaria’s ministry of interior has already established the identity of the two terrorists and identified them as Ricco ( first name of the Lebanese-Canadian ) and Bryan Jameson, the Lebanese-Australian.

According to the investigators, the two men are presently in Lebanon. For this reason Bulgaria’s prosecutor’s office has sent a legal request to Lebanon asking the government to detain and interrogate Ricco and Bryan.

Bulgaria’s prosecutor’s office also sent another letter to the Australian authorities asking them to confirm the real identity of Bryan Jameson who, according to the investigators, has received a bank transfer from Hezbollah.

Jason Kenney, Canadian minister of Citizenship, Immigration and Multiculturalism said last week in an interview with the CTV that the terror suspect from Canada has not been living in the country for years. “He arrived in Canada at the age of eight, lived with his mother in Vancouver and was granted Canadian citizenship 3-4 years later. He returned to Lebanon when he was 12,” the Minister explained.

According to Bulgaria’s Minister of Interior Tsvetan Tsvetanov, both suspects crossed the Bulgarian border on the same date – June 2012, but at different time.

Israel blamed Iran and its “terrorist proxy” Hezbollah for the attack, according to the report, but

Iran denied any involvement, while Hezbollah denounced Israel for waging an “international campaign” against it, without specifically addressing the bombing.