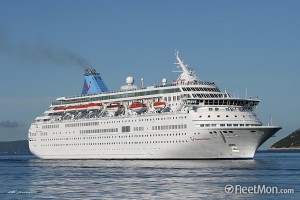 Five crew members have died after a lifeboat they were in fell from a cruise ship docked in the port of Santa Cruz de la Palma in the Canary Islands.

The accident happened on the Majesty, operated by UK-based Thomson Cruises, during a routine safety drill.

Those killed include three Indonesians, a Filipino and a Ghanaian. Three people were also hurt as the boat reportedly fell more than 20m into the sea.

The MS Thomson Majesty is believed to sail under a Maltese flag.

About 2,000 people were on board the cruise ship when the accident occurred around 12:00 GMT on Sunday, local media say.

Two of those injured are said to be Greek, and a third Filipino.

Thomson Cruises said in a statement that “one person has been discharged from hospital and we expect the other two people to be released from hospital imminently. Our thoughts are with the families of those involved.

“We are working closely with the ship owners and managers, Louis Cruises, to determine exactly what has happened and provide assistance to those affected,” the statement added.

The UK Foreign Office said it was aware of the incident and was “urgently looking into it”.