Egypt’s top cleric tells Ahmadiejad not to mess with Bahrain 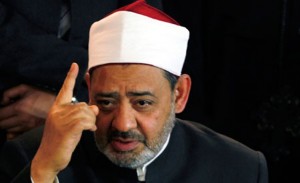 The president of the Islamic Republic of Iran was told by Egypt’s top Sunni Muslim cleric at al-Azhar university on Tuesday not to mess with the state of Bahrain.

He also urged the Iranian leader to grant the Sunnis of Iran their full rights .

Ahmadinejad is on a historic trip in Tehran’s efforts to improve ties with an Arab state which is now run by an Islamist.

Ahmadinejad will be the first Iranian head of state to visit Egypt since the 1979 Iranian revolution, which led to a rupture in diplomatic relations between two of the most influential states in the Middle East. He is due to attend a two-day Islamic summit in Cairo that begins on Wednesday.